This book is mainly about Ruby, and Tom. Ruby and Tom have a past, they were in the same facility together. A great deal happened there over a period of several years. Now suddenly Tom is back in Ruby's world, but Ruby isn't the same as she use to be. She has wondered away from God. She is a very good doctor now but so very very much from her past isn't healed or dealt with yet.

Tom coming back into Ruby's world at the same time that her job, her clinic for street kids and their families, and the new wing of the hospital are all collapsing on her. Some folks aren't so sure if Tom isn't causing Ruby more problems, he certainly is complicating things with Ben. Lilah is Ruby's friend, but also her employee and her son is in trouble and some days it just seems that the whole world is out to crush Ruby and that God left long ago.

This book was really good! Ruby Dawn has action, romance, gangs, criminals, law officials, hospitals and people in real life crisis's drawing closer to God and His plan for their lives. If I get another change to read another book by Raquel Byrnes I will and see if her other books are as good as this one.


ABOUT THE AUTHOR:
Raquel married her college sweetheart seventeen years ago and you can still find them spending time together chatting over a cup of coffee like when they were first dating.

Her husband is her biggest fan and most ardent supporter. He encourages her to take time for writing as often as he can. He regularly gives her gift cards to her favorite coffee house so that she can go there to write and relax.

He has been known to whip up his famous chicken quesadillas complete with guacamole and brownies for dessert.

Raquel has written books for more than a decade. She loves to do research and has taken private detective courses, gun classes, and underground tours to get every detail right for her novels. She writes romantic suspense with an edge-of-your-seat pace. Stories filled with faith, love, and adventure.

In 2009 she signed with agent, Terry Burns, at Hartline Literary. Terry worked to get her Shades of Hope series sold and in 2010, White Rose Publishing purchased the three-book series. 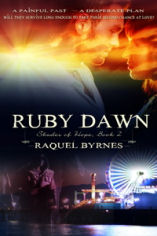 A painful past. A love returns A desperate plan.

Former street kid, Ruby now reaches out to runaways through her medical clinic in the worst part of the city, but her escalating battle with a gang leader puts that in jeopardy.

Cavalier, a risk-taker, charming… Ruby’s first love is now on the right side of the law and the center of a dangerous DEA sting involving her clinic.  Tom’s disappearance ten years ago broke her heart and rattled her faith. As their romance relights, memories of what it costs to love him flood her with fear.

Ruby’s battle with the gang ignites a firestorm of danger, and a pattern of lies from within her own camp emerges. With Tom’s life in the balance and her world cast in shadows, can Ruby trust God as she once did…or has she strayed too far, for too long to ever return?


If you would like to read the first chapter of Ruby Dawn, go HERE.