Yesterday I wrote day one of three days of posting covering the book Night Of The Living Dead Christian, by Matt Mikalotos. In my last post, found by clicking here, I told you about Luther and how I know people like him, or worse than him. This time I want to talk about a character whos' role and story didn't come out as much until later in the book.

Her name is Lara and apparently, Matt went to high-school with her. Well, at least in the book he went to high school with her, since "Matt" (yes the author of this book) is also one of the characters in his books. This is a trait of his work that I really enjoy. It brings to mind Alfred Hitchcock and Stephen King, who also have cameos or play rolls in their own work. Matt however, uses himself as a character in his books to help readers understand that no matter how far-fetched the story might seem, these are real life problems we are dealing with.

Lara is the pretty girl in high-school, the one most people envy, but so few get to know. She is the one that seems popular in school, work and church, but is actually alone and insecure. Twice divorced, and alone again Lara just hurts. Worse yet, all this has made Lara a Vampire. (I think I just heard you tilt in your seat out here, so get something to drink and stay with me here, this is important!) Life, and pain, and not being snugged up close enough to the real and living God who loves us have changed Lara into something she once wasn't. Where as Luther became a werewolf as a teen-ager, he figures he was born with this problem. Lara, on the other hand, was a changed into a monster.

Lara married the "wrong" man. Like so many people we know, she didn't see the warning signs or any major problems until after it was way too late. Charming and witty he was, until the night she upset him too much, and instead of just a werewolf coming out --- Lara got bitten, and beaten. Even after her brutal attack, she was unable to leave her first abuser. I know women right now, friends who I love who are in this very same situation. It is heart and gut wrenching, and yet they are not strong enough to leave the situation because before they know it they are changed too. They believe the lies that they are damaged, incomplete, unworthy, not whole. Thus a cycle of abuse has been established in their relationships. The strong attacking the weak, and the weak then getting strong enough to go attack someone who is yet weaker. I am not going to tell you all of Lara's story, because I want you to read this book!

Being the kind of Vampire in this book can take more than one form. (No I don't mean just fangs or no fangs.)  These Vampires are the people that we know, and might even love, that just are emotional empty pits. I have long called them "energy vampires". They are the reverse of the energizer bunny! Some of them are sent by the enemy, and some are just so needy that they don't realize they are sucking the life out of everyone around them. They have to plug into the only blood source that can make them whole again - Jesus! Many of these people aren't knowingly sucking the life out of the people they care about, they just haven't figured out how to fill up on what matters. Another word that describes them is co-dependent.

It takes nothing short of Jesus to change us, and we have to work at it. We can't be Christ like.. like Christ with out Him working in us on a daily basis. It isn't easy, it doesn't happen overnight. Transformation, freedom takes time. It is a process, and all process take time. Killing the monsters that are in our sinful nature takes dying to ourselves daily sometimes. It can be painful, slow, and requires that we know to the innermost of our core that we don't have control, but that if we are following Christ and He is in control, then we can tame and become free from the beasts of our innermost (sin) nature. 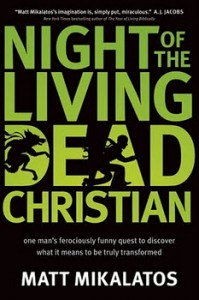 What does a transformed life actually look like? In his follow-up to the critically acclaimed Imaginary Jesus, Matt Mikalatos tackles this question in an entertaining and thought-provoking way: with monsters! As Christians, we claim to experience Christ’s resurrection power, but we sometimes act like werewolves who can’t control our base desires. Or zombies—90 percent shambling death and 10 percent life. Yet through it all, we are longing to become fully human, the way Christ intended . . . we just can’t seem to figure out how. Night of the Living Dead Christianis the story of Luther, a werewolf on the run, desperate to find someone who can help him conquer his inner beast before it’s too late. By turns hilarious and heartbreaking, this spiritual allegory boldly explores the monstrous underpinnings of our nature and our quest for Christlikeness.

In conjunction with the CSFF Blog Tour, I received a free copy of this book from the publisher.
(Which I am thankful for!)

Book link -  http://www.amazon.com/Night-Living-Dead-Christian-Ferociously/dp/1414338805/
Author’s Web site  -  http://www.mikalatos.com/
Participants’ links are below so you can read more than just my thoughts.

Carol, what a great post. It's a powerful book that has us all talking about spiritual issues, I think.

Thank you Becky! It is a very strong book, at least equal if not greater than his first book. I am so glad you put this book on tour for us!
Thank you!
Carol :)