I don't want you to miss this one! Love's Sacred Song is only the second or third book I have read that is based on Biblical charactors's lives. This book opens with a young woman who's name is Arielah. It is a tiny bit confusing until you read for a bit. Abba is her Father, and Ima is her Mother. Once you get that sorted out so that you aren't thinking  Abba Father God when you read, it helps! That is probably just me, but I went back and read the list of names 3 times trying to be sure I hadn't missed something.

Arielah is hated and abused by her two brothers, and loved and cherished by her Abba and Ima.  She knows she has a strong God called future, to be the treaty-wife of Prince Solomon. Then, King David dies. Now Abba knows when she marries Solomon, he will be the reigning King of Israel.  Her town is already up in arms that King David took a young girl from their town to warm his bed, but not as a wife or concubine.

Arielah wonders if her new upcoming position is going to help or hinder, but she trusts God and her Abba's decisions.  Arielah he has loved Solomon since she first saw him on a trip to the City of David when she was 7 years old, and Solomon was about 12.  After all, life in the politics of a palace following the aclaim of Israel's  favorite King isn't going to come easily with out a struggle, and Solomon's task is to bring peace to a war ravaged land.
And this dear readers, just covers the first parts of the book mostly! Mesu Andrews has plenty of research to keep things focused in the right time period, and none of her writing makes you feel that any of the Bible parts of this story were diminished or misused. I have not totally finished the last part of this book, and I can tell you I am very pleased with this book! I was shocked to check and find that Mesu Andrew's name is hard to find on the net, and that very few reviews of her work exist so far. I think I might have to work on fixing that!
Carol
About the Book: 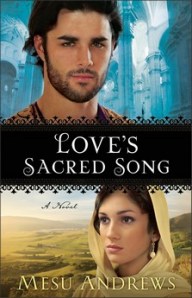 For young King Solomon wisdom came as God’s gift, but sacred love was forged through passion’s fire.
Standing in the overpowering shadow of his famous father, young king Solomon wavers between fear and bravado, longing for a love that is true and pure—a love that can be his cornerstone.
A shepherdess in the northern city of Shunem, Arielah has known since she first laid eyes on Solomon that it was her destiny to become his bride. When her father secures a promise from King Solomon to marry Arielah as a treaty bride to help unite the kingdom, it seems her dreams will come true.
But how can this simple shepherdess live as part of Solomon’s harem? Can Solomon set aside his distractions to give himself completely to just one woman? Or will he let duty, deception, and the daily routine divide his heart?
Book Trailer: 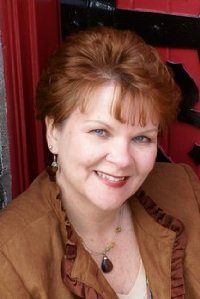 Mesu Andrews is an author and speaker who has devoted herself to passionate study of Scripture. Harnessing her deep love for God’s Word, Andrews brings the biblical world alive for her audiences.
Mesu and her husband, Roy, have two grown children and (Praise God!) a growing number of grandkids. They live in Washington, where Roy teaches at Multnomah University. They have a Rottweiler-pitbull named Bouzer who keeps Mesu company while she writes.

She’s published two books, Love Amid the Ashes and Love’s Sacred Song. Two more are scheduled for release with Revell in March of 2013 and 2014.

Love's Sacred Song is available March 2012 at your favorite bookseller from Revell, a division of Baker Publishing Group.

Carol, thank you so much for your beautiful review! What an encouragement! I'm thrilled you enjoyed Love's Sacred Song! Blessings on ya, gal!

Hi there! If you liked Mesu Andrews' "Love's Sacred Song" or "Love Amid the Ashes" you'll love her new book "Love in a Broken Vessel." Check out her book trailer and promotional giveaway celebrating the book's upcoming release! http://www.mesuandrews.com/contests

Thank you so much Ms. Andrews! I really appreciate your comment, and I really did enjoy it a great deal!
Carol :)

Hi Emily,
YES! I am very excited about Love In A Broken Vessel. My copy is coming in March and I am looking forward to post my review on it as well! YEAH!
Carol :)