Five Kingdoms, a huge, intricate story, and many, many characters are just the start of this huge book. This book was first done in three e-books, so if you have the print volume, it's three books in one. Kings, Princes, Maids, earthquakes, politics, court lifestyle are just part of this book.

This book is drawn from an Old Testament standpoint. You have kings, wives, yes that is multiples. There are concubines, and before people try to pass out saying that isn't Christian, go re-read several of the Old Testament kings. In this well woven story, we have people in need of a savior. There is a king who thinks the creature in the pit is a god, but is it really? How about if it isn't a god at all? Will he and his people find the truth? That is just ONE part of this multi-layer book that I need a lot more time to write you a review for this.

I can't wait to read more! My copy came from Bethany House Blogger in exchange for my honest review and nothing more. 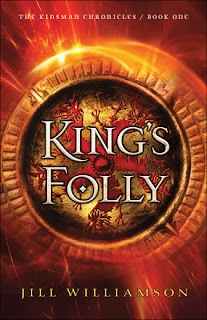 Their Battle for the Throne Has Just Begun.But Will It Matter if the World They Rule Collapses Into the Sea?
The gods are angry.
Volcanic eruptions, sinkholes, ground shakers--everything points to their unhappiness. At least that is what the king of Armania believes. His son Prince Wilek thinks his father's superstitions are nonsense, though he remains the ever dutiful First Arm of Armania.
When a messenger arrives and claims that the town of Farway has been swallowed by the earth, the king sends Wilek to investigate. But what Wilek discovers is more cataclysmic than one lost city. Even as the ground shifts beneath his feet, Wilek sets out on a desperate journey to save his people and his world. But can he do it before the entire land crumbles?
This volume includes the first three parts of The Kinsman Chronicles originally released as ebooks.
Part 1--Darkness Reigns
Part 2--The Heir WarPart 3--The End of All Things 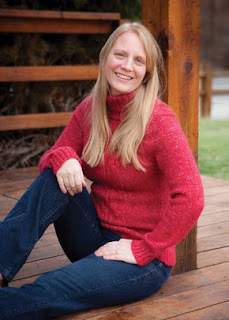 Jill Williamson writes fantasy and science fiction for teens and adults. Jill grew up in Alaska, staying up and reading by the summer daylight that wouldn't go away. This led to a love of books and writing, and her debut novel, By Darkness Hid, won several awards and was named a Best Science Fiction, Fantasy, and Horror novel of 2009 by VOYA magazine. She loves giving writing workshops and blogs for teen writers at www.GoTeenWriters.com. She now lives in the Pacific Northwest with her husband, two children, and a whole lot of deer. Visit her online at www.jillwilliamson.com.

How hard it is to find a series you really like that keeps you excited book, to book? Well, this is one of those series! I was thrilled to read this next installment and I can't remember why I thought that was the end of the series. I'm so glad it isn't.

Drew and Madeline have come to a house party. It's going nicely, till there is an arrest, and then a murder, and another death. Maybe that wasn't such a good party after all, when people wind up dead. Looks like among old friends, there is a killer, or worse. The Inspector from Scotland yard has more pressing issues at the moment. That leaves things squarely in Drew and Madeline's ball-park if they want to solve this crime.  Are his old friend's involved, are they safe to trust? What is going on with this case and will it be Drew's undoing?

With a in depth story, Drew has to assess if he is following what God has planned for his life, or if he is off track. This book stands alone, but oh how much better it is as a series. It's a tad bit slower than the other books, but I enjoyed it and look forward to the next one! I have a place for it on my book shelves saved up already!

My copy came from Bethany House Bloggers in exchange for my honest review and nothing more. 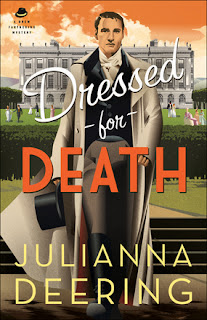 A Regency-Era Costume Party Should Have Been an Amusing Diversion, but it Seems Wherever Drew Farthering Goes, Mystery--and Murder--Are on the Guest List
Drew and Madeline Farthering arrive at a Regency-era house party at Winteroak House, excited to be reunited with old friends, including Drew's former Oxford classmate Talbot Cummins. Tal is there with his fiancée, Alice Henley, and though many present seem worried about the couple, nobody is prepared when Alice dies from an apparent overdose. Tal refuses to believe she'd taken the drugs intentionally, and a dark question arises of whether the death is an accident or murder.
The police have their own information though, and Drew is shocked when they arrest someone he's trusted and admired since his childhood--someone who's been smuggling drugs into the country for years. Stunned by what has happened, Tal begs Drew to get to the bottom of everything, but Drew has never felt more unsettled. Questioning his own ability to see people as they really are, Drew doesn't know whom to trust, and he's not ready for the secrets he's about to uncover--or the danger he'll bring down on everyone he holds dear.

JULIANNA DEERING has always been an avid reader and a lover of storytelling, whether on the page, the screen or the stage. This, along with her keen interest in history and her Christian faith, shows in her tales of love, forgiveness and triumph over adversity. A fifth-generation Texan, she makes her home north of Dallas with three spoiled cats and, when not writing, spends her free time quilting, cross stitching and watching NHL hockey. Her new series of Drew Farthering mysteries set in 1930s England debuts with Rules of Murder (Bethany House, 2013) and will be followed by Death by the Book (Bethany House, 2014). Murder at the Mikado is book 3, and Dressed for Death is the 4th book in this series.