Hostage In Taipei: A True Story of Forgiveness and Hope by McGill Alexander ~ Carried Away Memoirs In March

Welcome back to Memoirs in March! It is time to get carried away again! 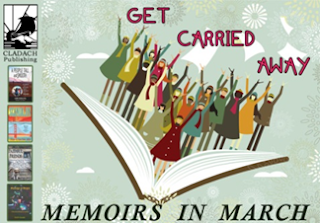 Well, due to life being what it is this week I am still reading!
This is RIVETING! I haven't quite finished but you can see why this made National Geographic in a full TV production! WOW--- God is so good!
Carol :)

This week we are featuring Hostage in Taipei: A True Story of Forgiveness and Hope by McGill Alexander.
For 5 days, starting today, we are offering a(free) download of the Kindle edition:http://amzn.com/B007B6QRYY
About the Story:
A Christian family were taken hostage by Taiwan's most-wanted criminal, Chen Chin-hsing. Mac Alexander, a South African diplomat, and his family were held at gunpoint and seriously wounded in crossfire with the police. Demanding justice for his imprisoned wife, Chen threatened to commit suicide once his mission was accomplished. Besieged by media and police, confusion ensued; but several heroes rose above the danger; and through God's miraculous intervention, the Alexander's faith overcame and grasped the heart of Chen Chin-hsing. The Alexander's showed the world a stunning example of Christ's forgiveness in the midst of violence and revenge.
Mac Alexander was serving as South Africa's military attaché in Taipei, Taiwan in 1997, when he and his family were taken hostage in their home by the most feared and dangerous criminal on the island: Chen Chin-hsing. Using Mac and his oldest daughter as human shields in shoot-outs with the police, Chen brought them to the brink of death, as both were shot in the crossfire. But the family responded with love and forgiveness by leading Chen to Christ – and everlasting life – before his execution.
Watch the National Geographic video reenactment of this family’s hostage takeover, read an interview with Anne Alexander, Mac’s wife, visit the blogs listed on the blog tour and find other tidbits offered during Memoirs in March athttp://cladach.com/Hostage-In-Taipei.html.
"You did a good deal of justice to the most fascinating news story Taiwan had seen in a decade or more.
I also appreciate your honest, even-handed criticisms of both the police and the media, and straightforwardness
in proclaiming your faith to God." ~ David Frazier, features editor, The Taipei Times
Read this amazing testimony and get "carried away" with us. Anyone interested in current events, true-experience thrillers, and God's amazing deliverance will enjoy this book!
Author Video:
Watch the TV docudrama of the Alexander's story here:

The Amazon Kindle version is FREE March 22 - 26 here.
http://amzn.com/B007B6QRYY
Read Excerpt:
here.
http://www.cladach.com/HITexcerpt.pdf
Review Quotes:
"The Alexander family sowed seeds of love in hatred, forgiveness in harm." ~ Baptist Mass Communications
"People were amazed how each member of this family could have acted so nobly, courageously and lovingly towards this most notorious criminal." ~ Jennifer Sun, Campus Magazine
About the Author:
McGill Alexander is a career soldier who served as Brigadier General in the South African Army. From 1996-97 he was on assignment in Taipei, Taiwan as South Africa's military attache. Mac and his wife, Anne, are the parents of three daughters and have several grandchildren.
Author Photo: