Here went part of my book ideas, but I so enjoyed reading it! It is the end of of the world, or is it? Aliens have hovered aka landed, and the first few waves have unleashed Shisa's in droves, a zombie viruses, and so so much more!

Jennie, and her brother Mickey are in major, major trouble. The aliens have torn her family into, and their lives will never be the same. Running from the alien aggressors, and the virus zombies, Jennie and her brother have only a few friends they can trust. Hugh has been trying to help them survive. Hugh's brother Brad has lived so far, but is he really safe to trust?

Jennie is developing into a strong woman, and Hugh is simply amazing. Sure they can make some dumb, dumb mistakes at times, but then, most movies or books in this genera do tend to do that. However, this book has other redeeming qualities.

In a post apolitical environment, the end has not yet arrived, but for the survivors the entire world has changed. Mixed with pertinent verses from Revelation, this book was quite a page turner that I didn't want to put down. I'm hoping I get to review the next installment in this series!

My copy of this book came from Story Cartel in exchange for my honest review and nothing more. 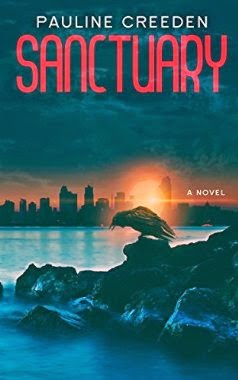 What if the Biblical End Times unfolded in a way no one told you about and the rapture didn't happen before the tribulation began...

"Sanctuary crosses boundaries and borders and incorporates elements of all kinds of action and intrigue, from thriller-like adventure to a post-apocalyptic tale of life after aliens invade. Thus it will delight readers seeking something truly different, while disappointing those who anticipated a shallow, one-dimensional subject and story line." - Midwest Book Review

Left Behind for the Hunger Games generation

In a heart-racing thriller described as Falling Skies meet The Walking Dead, Jennie struggles to find a safe place for what’s left of her family. But it seems as though there is no place sacred, no place secure. First the aliens attacked the sun, making it dimmer, weaker, and half what it used to be. Then they attacked the water supply, killing one-third of Earth’s population with a bitter contaminate. And when they unleash a new terror on humankind, the victims will wish for death, but will not find it…

When the world shatters to pieces around her, will Jennie find the strength she needs to keep going?

Look for Survivor and Silence ~ The companion novels to Sanctuary coming in 2015!
http://paulinecreeden.com