Dr Who: The Crawling Terror

I loved this fast, fun Dr. Who read! Clara and the Doctor are brought to a tiny town by the TARDIS. Here they find horrific, massive huge giant insects who are deadly. But where have they come from? There are these rumors of a "bug farm" or something like that. Did this massive insects come from there? Can bug spray work, is anything EVER that simple?!

How on Earth (or is it not from Earth) are stone ruins involved with giant bugs. Might not be connected at all, but it will take the Doctor and Clara to save this town, and perhaps our planet from being taken over by the forces behind the giant bugs.

Well written, page turning, and everything you would long for or expect from giant bugs and the Doctor.

My copy came from Blogging For Books in exchange for my honest review and nothing more. 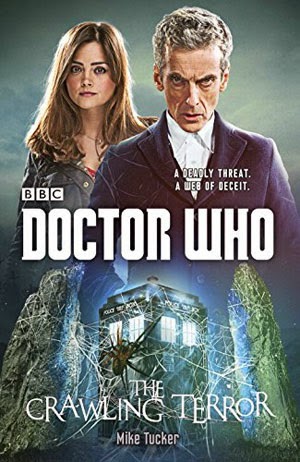 "Well, I doubt you'll ever see a bigger insect."
Gabby Nichols is putting her son to bed when she hears her daughter cry out. 'Mummy there's a daddy longlegs in my room!' Then the screaming starts... Alan Travers is heading home from the pub when something rushes his face - a  spider's web. Then something huge and deadly lumbers from the shadows... Kevin Alperton is on his way to school when he is attacked by a mosquito. A big one. Then things get dangerous.

But it isn't the dead man cocooned inside a huge mass of web that worries the Doctor. It isn't the swarming, mutated insects that make him nervous. It isn't an old man's garbled memories of past dangers that intrigue him.

With the village cut off from the outside world, and the insects becoming more and more dangerous, the Doctor knows that no one is safe. Not unless he can decode the strange symbols engraved on an ancient stone circle, and unravel a mystery dating back to the Second World War.

ABOUT THE AUTHOR:
MIKE TUCKER is an Emmy nominated, BAFTA winning visual effects  designer. He spent 20 years as part of the BBC's in-house Visual Effects  Department before setting up his own company, The Model Unit, in 2005.  As a writer he has contributed to the 'Doctor Who' ranges, novelised several scripts for the 'Merlin'  range, and co-authored a history of the BBC VFX Department.

The book link: http://www.amazon.com/gp/product/B00KUQITIY
Posted by Carol E. Keen at 11:04 AM