Storm by Evan Angler (Book 3 of the Swipe Series)

This is the first book I have ever ready by this Author. At first I was a bit lost, even though some background was given to try to get us up to speed. For a while I felt like I wish I had a list of the names and places to refer to, but after a little bit I felt up to speed.

There is this group of un-marked kids, called Dust. (I'm guessing because we are made from dust.) They are fighting to stay free because they refused The Mark. (Yes, this is set in end-times or maybe Revelations here.) This group of young teens are on the run from DOME, who is fit to be tied because they didn't take The Pledge, and get The Mark. So you have the Marked, and the Markless. Recently they lost a member when they broke in a facility to get out another member's sister. Instead of getting her out, she stayed and one of their own is now being re-programmed, ie--- tortured.

Meanwhile, the whole planet is "at peace" because of the IMPS. They are "peacekeepers". Please read that as fighters in training, an army for the probably civil war that keeps being whispered about. Two major rulers are each over one half of Earth, but rest assured (not!) they are in perfect unity. Oh so much unity, only it isn't. The weather is now being controlled by the government, and they have turned off the rain. No one knows why yet, and the people who are sabotaging the rain stations are basically black-ops.

Topping all off that off, Dust had hacked some messages and they know about Project Trumpet. That is suppose to be a way to kill off all the Markless, only it seems to have backfired and a Marked is very sick. This is nanobot controlled and there isn't an off switch. It is only activated by certain special agents, so how did Erin, one of the Marked who is with the Dust group get infected with Trumpet anyway? The possible cure is even farther out than anticipated, and the unrest, tension and suspense are always underlying.

This book has some fun things in it, mixed it with the stress of surviving a world going to - well pretty much you know where it is going! I did enjoy it, but I did really wish I had been able to read the first two books so that I wasn't so very lost for a while. It is not overly "Christian" in the preachy way like some books are, but instead Evan Angler was writing about surviving what was left of the world after The Mark and massive changes. 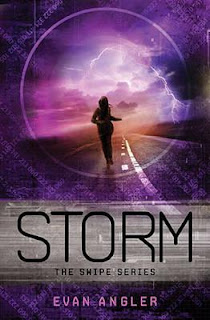 In a future United States under the power of a charismatic leader, everyone gets the Mark at age thirteen. The Mark lets citizen shop, go to school, and even get medical care—without it, you are on your own. Few refuse to get the Mark. Those who do . . . disappear.

Logan Langly went in to get his Mark, but he backed out at the last minute. Ever since, he’s been on the run from government agents and on a quest to find his sister Lily, who disappeared when she went to get her Mark five years earlier. His journey leads him to befriend the Dust, a vast network of Markless individuals who dissent against the iron-grip rule of the government. Along the way to the capital to find Lily, the Dust receive some startling information from the Markless community, opening their eyes to the message of Christianity and warning that humanity is now entering the End of Days.

In Storm, Logan and his friends are the leaders of the Markless revolution. But while some Markless are fighting Chancellor Cylis’ army, the Dust is busy trying to find a cure for a horrible epidemic sweeping through the Marked. And it's difficult for them to know who to trust, especially when they aren't sure if Logan's sister Lily, one of the commanders in Cylis' army, is on their side or not. And all across the nation—and the world—the weather has become less stable and a storm is brewing that bigger than any of them could have ever imagined.


In conjunction with the CSFF Blog Tour, I received a free copy of this book from the publisher.

Interesting review. It's good that you were able to follow along when you hadn't read the first two (which are equally good). Thanks for sharing!