This is my first book by Sandra Orchard. Deadly Devotion is good enough that I didn't want to put it down. It has a nice easy flow with plenty of drama and suspense. Kate's good friend Daisy is dead. The police say she poisoned her own tea and slowly, with a lot of pain, took her own life. Kate knows better. Daisy would NEVER have taken her own life. She was a Christian and something is all wrong. So Kate takes it upon herself to find Daisy's killer - with or with out the help of the law.

Tom is just trying to see how his job as a detective will work since he isn't with the FBI anymore. Tom is  understands her not wanting to think her friend did herself in, he also feels that Kate could have had motive to remove Daisy. Kate is just a little bit too suspicious to him, and yet he is drawn to her at the same time. Kate's investigation is putting her in danger, and its not easy task for someone who isn't at all trained in sleuthing or danger to try to solve her friend's murder.

Things do jump back and forth into the past quite a bit, but if you focus on how you can be driving down a road and remember something from your past - then it makes it easier to follow in that area. You do feel a bit like you came in on the middle of the story that is filling in as you go. However, I have to say that is how life is! When you get new friends that is how it works, so though I was a bit off kilter by it at first, I soon was able to put it together very nicely.

I look forward to the next book in this series, it should be another well handled adventure with another well dealt with topic that often effects both Christians and non-Christians alike! 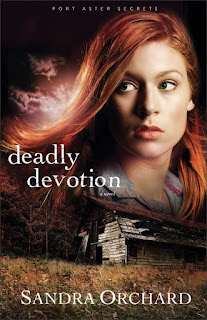 Research scientist Kate Adams and her colleague Daisy are on the brink of a breakthrough for treating depression with herbal medicine when Daisy suddenly dies. Kate knows that if it hadn't been for Daisy's mentorship, she wouldn't have the job she loves or the faith she clings to. So when police rule Daisy's death a suicide, Kate is determined to unearth the truth.

Former FBI agent Tom Parker finds it hard to adjust to life back in his hometown of Port Aster. Though an old buddy gives him a job as a detective on the local police force, not everyone approves. Tom's just trying to keep a low profile, so when Kate Adams demands he reopen the investigation of her friend's death, he knows his job is at stake. In fact, despite his attraction to her, Tom thinks Kate looks a bit suspicious herself.


As evidence mounts, a web of intrigue is woven around the sleepy town of Port Aster. Can Kate uncover the truth? Or will Tom stand in her way? 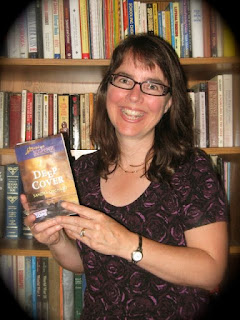 Sandra Orchard is an active member in American Christian Fiction Writers, The Word Guild, Romance Writers of America, and a local writing group. She recently participated in the Writers' Police Academy for hands-on training and simulations at a police training facility. She is the author of Shades of Truth, Critical Condition, and Deep Cover, which won the Canadian Christian Writing Award for romance in June 2012 and was recognized as one of the top five novels of the year by Family Fiction magazine. Sandra has also received a Daphne DuMaurier Award for Excellence in Mystery/Suspense in both the inspirational category and for best score overall. She lives in Niagara, Ontario, Canada.

Sandra would also love to connect with you and your readers on Facebook at http://www.Facebook.com/SandraOrchard  and she has given us BONUS FEATURES! Check this link out:
http://sandraorchard.com/extras/bonus-book-features