A Simple Song by Melody Carlson

When I picked up A Simple Song, I had planned to read a chapter or two and go to sleep. What happened instead is that I didn't stop reading until I finished the entire book. This book is about teen-aged Amish girl who has a gift. A gift that her Mother had and that her Mother had kept secret. A gift of singing that she doesn't know if it is wrong, or right. But things at home are not easy. Her Dad needs an operation that no one can afford. What is God's answer?

So this is when Katrina, with the support of her best friend and one other family member, winds up a contestant on American Star. (Yes, it is a take off of some other famous TV talent competition shows.)
What makes this good though is the characters, and the influence that Katrina and her Aunt have on others.

It is a good story, a fast read, and the only thing that I was sad about is that I wished that I felt that Katrina had a bit more in-depth understanding that putting on a show, or a look, for a temporary event doesn't change who you are inside. I understood the conflict, but from my own life I know that sometimes you have a goal that must be reached, and the way to reach it might not be your favorite way to do so. That doesn't mean it is a life long change, nor that who you really are is going to be forever altered. Over all I loved it and it has a very nice ending. 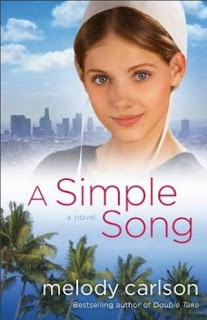 Katrina Yoder loves to sing, but her Amish parents view singing as vainglory and a sin. Katrina's best friend, Bekka, is convinced Katrina should try out for American Star, a televised singing competition that Bekka has been secretly watching. Katrina resists the temptation until her father's health worsens. He desperately needs a surgery the family cannot afford. Katrina decides she must go against her parents' wishes to win the money needed to help her father. But how will she handle herself as an Amish teenager out in the world?

Melody Carlson is the award-winning author of over two hundred books with sales of more than five million. She is the author of several Christmas books from Revell, including the bestselling The Christmas Bus, The Christmas Dog, and Christmas at Harrington's, which is being considered for a TV movie. She is also the author of many teen books, including Just Another Girl, Anything but Normal, Double Take, the Life at Kingston High series, and the Diary of a Teenage Girl series. She is the winner of a Romantic Times Career Achievement Award in the inspirational market for her many books, including the Diary of a Teenage Girl series and Finding Alice. Melody and her husband live in Oregon.

Available June 2013 at your favorite bookseller from Revell, a division of Baker Publishing Group
Posted by Carol E. Keen at 10:57 PM