Eye Of The Sword by Karyn Henley (Angelaeon Circle)


Today's book is Eye Of The Sword. 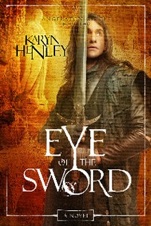 This is my first book by Karyn Henley and it was very interesting!
Most of the characters in this book are Angels, but some are humans, and yet others are a mix of humans or immortals and angels. There are three main kingdoms, and a whole lot of politics and plots involved, and there is a great deal going on in several kingdoms.

Trevin is the main man for this tale. He is in love with Melaia, but he isn't free to marry her yet. At the moment Trevin is a newly appointed comains (think of a Knight) for Melaia's father, who is the king of Camrithia. Trevin has not even been totally assigned into his roll of comain before he has a new enemy.
The price of Dregmoors, Prince Varic wants Melaia as a peace treaty prize. The problem is that that Varic is just plain evil, selfish, mean and cruel. King Laetham has mood swings, and right now his mood is to marry Princess Melaia to Prince Varic so that there will be peace.

Thus Main Trevin, now a Main because he is a comain of King Laetham, is dispatched on a mission. He is to seek out the Oracle and bring back word to King Leatham, and find out where all the missing comains have gone. King Leatham is very short on comains as of late. In addition, Trevin has a mission of his own that is for Princess Melaia. Long ago there was a tree called The Wisdom Tree. It linked Earth to the Heavens and the Angels used it as a stairway to take souls that were allowed beyond the veil to their final reward. Only, this tree had something happen to it. A fruit was taken, and the Angel that guarded the tree said you must come back, and you must bring back the three seeds from inside the fruit. That didn't exactly happen. Instead two brothers and a niece swallowed the seeds. It caused them to be Immortal, and the two brothers are forever at war with each other. One is very evil, the other rather kind, and the girl who was the niece just very strange and confused. Even so, once this happened the tree was taken apart and from its wood was crafted three harps.

Princess Melaia has one that her Mother gave her. The rest is a riddle. One harp touches the sky, and one harp is as of stone. The three harps must be put back together to form the tree so that the Angels can again walk the stairs to the veil and beyond. This big event has to have the stars lined up correctly as well, so once every 200 years. That time is coming up quickly and if the world isn't to be taken over by evil plots of men and warped creatures then Trevin must find the harps.

Meanwhile, Trevin himself has lots of self -doubt and worry, and stress, and a great dealing of not knowing who he is. Before long his quest will lead him to be accused of murdering a Prince. He will have have to face the Eye of the Sword and in it he will see the ugliness of his soul, or the man he is going to become. A scary thing to face yourself and figure out what you can and can not do, especially when the lives of those you love hang on the actions you are able to accomplish.

Eye Of The Sword was quite an adventure, and I haven't gone nearly into the depth that I could with all the characters and plots that are occurring. It did well as a stand alone novel since I have not read the first book in the series. I am curious to read the next book because while very satisfying there are words from the Oracle that are not yet fulfilled. While written by a Christian writer, this book could pass in a secular venue with out hesitation.

Where angels walk the ground and the future is told in song, does a man of low rank have a chance at love with a princess?


In Camrithia, a land of shadows and mystical secrets, Trevin lives to serve King Laetham. But his heart belongs to the princess, Melaia. When the King sends Trevin on on a dangerous quest to find the missing comains—captains in the king’s army—he must leave Melaia to the advances of a swaggering Dregmoorian prince.

Challenged to prove his worth, Trevin throws himself into his quest. Striving to prove his love, Trevin undertakes a second mission—find the harps Melaia seeks in order to restore the stairway to heaven. Through fire caves, rogue winds, and murderous threats, Trevin remains steadfastly dedicated to his quest—even when he is falsely accused of a heinous crime. As Trevin’s time runs out, he realizes he must face the shame and horror of his own past and the nightmare that has come to life. Will he have the courage to finish what he has started?

Author Bio
Karyn Henley is a best-selling children’s book author and an Emmy-Award winning musician. She is the author of the original Beginner’s Bible, which sold over five million copies and was translated into 17 languages, and Breath of Angel, the first novel in the Angelaeon Circle. An accomplished songwriter, Karyn has been a Dove Award nominee and received a regional Emmy Award as music composer for a Christmas television special. She lives in Nashville, Tennessee.

Well done, Carol. You did a good job summarizing it. So I'm curious. Do you think it's a good thing or not that this book could be read in secular circles?

I'm looking forward to the third book, too.

I think that it is a good thing to have a book that can cross-over "so to say" into readers that might not otherwise find an Author that could lead them to Christ down the road. Let's say this series of books has the ability to stand in a secular arena and gains a fan. This new fan then reads another book by the same Author that talks more about Christ or shows God's love vividly. Then that person has a chance to come to Christ, or gain a deeper walk that they might not have had if there were not a series or a book that was blatantly "Christian".

If an Author of a popular series that has little or not mention of Christianity then works the Gospel into their next works, lives can be changed.

I want to read the third book, and I wouldn't mind reading the first book either!