Dying To Read by Lorena McCourtney (The Cate Kinkaid Files)

This is the first time I have heard of Lorena McCourney. Dying to Read had such a cute title that I had to check it out! Cate Kinkaid is rather down and out. Her plans for marriage have not worked. Her plans for jobs have not worked out at all! So her Uncle kindly let's her be a "junior" PI. Their firm only handles little things. Cheating spouses, lost items, nothing major. That was, nothing major until Cate tries to find a missing girl to get her alleged inheritance to her and winds up smack in the middle of a book club and a dead woman! With Uncle Joe suddenly in the hospital Cate is very much in the middle of trying to sort out if this was a murder, or an accident. The police say it is an accident, but the book club ladies say it isn't. They are the Whodunit club and they each suspected someone else in their group! Not to mention there is a missing boyfriend - who had been a boyfriend to two of the ladies, including the one who is now deceased.

Then there is a beautiful blue eyed white cat - formerly owned by the "dearly" departed. The cat is suppose to be deaf, but Cate winds up with her as well. And Willow, the girl she was looking for who could pass for Cate if you weren't careful. Did she cause this crime, lead someone to it, or was a it all a weird freak accident? And then there is Mitch! He paints and does odd jobs, but that is just on the surface. Mitch really likes Cate, but we aren't sure if he is a good guy or not.

There is plenty of suspicion to pass around, a good bit of mystery and a few dashes of romance as well in this book. Clearly someone did die, but you will have to read it yourself to find out if it was because she was Dying To Read, or for quite another reason.


DYING TO READ is Book #1 in the new Cate Kinkaid Files mystery series. Cate, desperate for a job, goes to work as an assistant private investigator for her Uncle Joe's Belmont Investigations. Her first assignment is supposed to be easy and uncomplicated, no danger or mayhem, definitely no murder. All she needs to do is make certain a woman named Willow Bishop is living at a certain address. Instead, she finds herself up to elbows in Whodunit ladies, a paint-blobbed hunk, a deaf white cat - and killers! 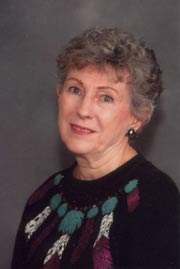 My husband and I live in southern Oregon. For many years we lived on rural acreage, lots of space and country peace and quiet. But a few months ago we decided it was time to make the move to town.
If any of you have ever lived in one home for 32 years, you'll know how difficult a move this was. Emotionally difficult, but mostly it was all that STUFF we had to get rid of. Everything from two old sofas (one given away, one chopped up and burned) to a pair of mounted impala horns to a dump truck and a 1,000 gallon gasoline tank.

But the move is, at last, accomplished, and I'm finding myself quite pleased with town living.
I have one son and a granddaughter. Jim has two daughters and three grandchildren. Our family is fairly well scattered, so we do not see them as often as we’d like.

I started writing in the fifth grade. All my stories were about horses. This love of horses carried me through a degree in agriculture from Washington State University. My first job out of college, however, was with a big meat-packing company in the Midwest, where I quickly discovered that writing about hogs and sausage making was not my life’s calling.

Marriage and motherhood intervened, and by the time I got back to writing, I knew fiction was what I wanted to write. I started out doing short stories for children and teenagers, mostly for Sunday-School publications. Then, primarily because of financial pressures, I wrote women’s short stories and romance novels, all the time promising the Lord I would get back to Christian writing. Finally, after 24 published romance novels, the Lord made plain that it was time to make good on that promise. It was time to become a Christian author and write exclusively Christian fiction. The first 6 of these books were with the Palisades line of Christian romance, but with my 7th book of Christian fiction, WHIRLPOOL, I turned to a stronger emphasis on mystery.

One of the nicest perks of being a Christian author is hearing from readers, and I’d be delighted to hear from any of you. Contact me at lorena2@earthlink.net.

Available August 2012 at your favorite bookseller from Revell, a division of Baker Publishing Group.