My review for this book will be here in a few days, but first I want to share a recipe with you!
Check this out!!!  Consider this post the prequel to my book review. :)

Quiche! I LOVE this stuff! Seriously I do. I have since I was a child. :)
Please TRY to not drool on your keyboard, phone, tablet or iPad device when you see this. 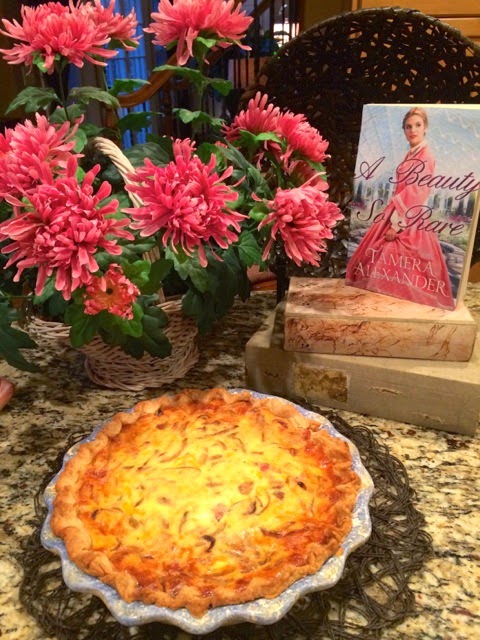 Eleanor Braddock’s Savory Custard
(or Ham and Cheddar Quiche)
From the novel A Beauty So Rare
by Tamera Alexander
www.TameraAlexander.com

Most people think quiche originated in France. Not so. It’s originally a German dish and people referred to them as "savory custards" in the 19th century. Which is accurate since the egg-based mixture forms a luscious-like custard as it bakes.

In my novel, A Beauty So Rare, the second standalone novel in the Belmont Mansion series, the heroine, Eleanor Braddock, is "a cook with a dream." But her dreams don’t quite turn out like she thinks they will. However, her savories always do!

I hope you enjoy this recipe (or "receipt" as recipes were called in the 1800s) from A Beauty So Rare. For more about A Beauty So Rare and for recipes from all my novels, visit www.TameraAlexander.com.

Ingredients
1 old-fashioned unbaked pie crust (recipe below)
1 large onion,diced (or sliced if you like larger pieces of onion in your savory)
2 tablespoonsbutter
1 pound cooked ham diced into cubes (if using bacon, use 8 slices, fried chewy, not too crisp)
8 large eggs
1-1/2 cupsheavy cream or half-and-half
1/2 teaspoon salt and pepper, or to taste (I always go heavier on the pepper, personal preference)
1 3/4 cups sharp cheddar cheese, grated

Instructions
Sautéonion in the butter in a skillet over medium-low heat for about 10 to 15 minutes, stirring occasionally, until the onion is golden brown. Set aside to cool.

Chop the ham into bite-sized pieces (or fry your bacon until chewy, then chop). Set aside to cool. Preheat the oven to 400 degrees. Roll out pie crust and press into a deep dish pie plate. A medium-sized iron skillet works wonderfully for making a savory custard (and is what Eleanor used). The crust comes out divine. I just happened to use a pie plate this time.

Whip the eggs, cream, salt and pepper in a large bowl, then mix in the onions, ham (or bacon), and cheese. Pour the mixture into the pie crust. Cover the pie plate (or skillet) lightly with aluminum foil and bake for 40 to 45 minutes. Remove the foil and continue baking for 10 to 15 minutes, or until the quiche is set and the crust is golden brown. QUICK BAKING TIPS: The quiche may still seem a little loose when you first remove it from the oven, but it will firm up nicely once removed from the heat. Also, watch that lovely crust so the edges don’t get overly brown. I use a silicone pie crust shield if that starts to happen. Those are a fabulous invention (but foil crimped around the edges works just as well).

Remove from the oven and allow the savory custard torest for 10 to 15 minutes before diving in. It’s so good, and just like Eleanor Braddock would make. It’s also delicious left over and warmed up the next day.

This is a wonderful crust that I’ve been using for years. Eleanor would likely have used lard in place of Crisco (since lard was cheaper than butter in her day), and you may too, if you prefer. Yes, lard is still available on most grocery shelves, although I’m pretty sure I just felt you shudder!

This pie crust "freezes beautifully " as they say in Steel Magnolias (instructions on freezing below), so even though I may need only one pie crust at the moment, I always use this recipe and make a second, and freeze it for later. Makes that next pie (or savory custard) go twice as fast!

In a large bowl, using a pastry cutter (or two knives will do the job), gradually work the Crisco into the flour for 3 to 4 minutes until it resembles coarse meal. In a smaller bowl, whipthe egg and then pour it into the flour/shortening mixture. Add 5 tablespoons of ice-cold water, 1 tablespoon of white vinegar and 1 teaspoon of salt. Stir gently until all ingredients are blended well.

Halve the dough. Form 2 evenly-sized balls of dough and place each into large sealable plastic bags. Using a rolling pin, slightly flatten each to about 1/2 inch thickness to make rolling easier later. Seal the bags and place them in the freezer until you need them. (If you’re using the crusts immediately, it’s still a good idea to let them chill in the freezer for about 15- 20 minutes. They’ll be much easier to work with.)

When you’re ready to roll the dough for your crust, remove from the freezer and allow to thaw for 15 minutes (if it’s frozen). On a well-floured surface, roll the dough, starting at the center and working your way out. Sprinkle flour over the top of the dough if it’s too moist. If the dough starts to stick to the countertop, use a metal spatula and gently scrape it up and flip it over and continue rolling until it’s about ½inch larger in diameter than your pie plate (or iron skillet).

Using a spatula, carefully lift the dough from the surface of the counter into the pie pan. (I sometimes fold my well-floured dough in half and then "unfold" it onto iron skillet. Or you can lop it over your rolling pin. That works well, too.) Gently press the dough against the sides of the pan or skillet, getting it all tucked in. Then crimp the edges in whatever way you prefer. And now, you’re ready for that yummy savory custard filling above, or maybe for a fruit pie.

If you make this recipe (or if you’ve read A Beauty So Rare), I’d love to hear from you. You can write me through my website at http://www.tameraalexander.com/contact.html.
Posted by Carol E. Keen at 3:54 PM

I loved the book so I'm very excited to try the recipe Tamera shared! Thanks for posting!

I'm reading the book now, and I will be posting another recipe that Tamera shared shortly! :) Thank you so much for commenting!
Carol :)