A Beauty So Rare by Tamera Alexander (A Belmont Mansion Novel)

This is it folks! My review of A Beauty So Rare, and a few more extras. :)
Check the bottom of my post for more free fun things!

Belmont Mansion is not too far from me, and I have been there before. That peaked my interest to start with, that and the quality of books I have read so far from Tamera Alexander. Belmont and Nashville are the setting of this book. Belmont was owned and run by Adelicia Hayes Franklin Acklen Cheatham, and in this book she is Elanor Braddock's Aunt. Eleanor is extremely tall for a woman, well past her "prime" at the age of  thirty, and she feels she lacks the standard of beauty that other women have. Thus she as resigned herself to never being married. Instead Eleanor has dreams of other endeavors. Summing all the bravery required she presents her plans, which entail some needs for financing, to her Aunt Adelicia. I find Elanor's response from a Lady who is rich and in powerful positions, to be a strong one. This was the first quote in this book that really got my attention.

While this isn't a quote anyone else has yet chosen from this book, it was significant to me because it is a pivotal point. This is the point in our lives where we announce something that is burning in our heart, and when spoken out-loud to people in a position to help, harm, or influence us we bear the brunt of their reaction. Reaction is often shock, disbelief, out right scorn, or in some cases rejecting laughter. None-the-less, Aunt Adelicia's reaction did not stop Eleanor. Instead, it forges Eleanor forward regardless of it being beneath and outside of her preset role in life as the relative of THE Lady Adelcia of Belmont Mansion.

Soon she has done something very out of character for a person of her position. She is thinking through one of her heart's desires, cooking, and she has rented a building in the lower income area! She plans to follow the dreams of her heart and is determined to find a way to do so. Much to her discomfort, Marcus, the man she assumes is an under-gardener in her Aunt's Conservatory has rather stumbled into her plans, and her life.

Hiding his true identity from Eleanor, Marcus is working to hybridize potatoes, but before long, these two are going to find they have some goals that they could work together towards, or tear each other apart with. Marcus's secret is deep, and even his very identity is hidden. Eleanor is hiding secretes as well. As much as they try to not be interested in each other, they find themselves in a growing relationship. But secrets, as we know, come out and these two will either find and follow God's plan for their lives and those around them, or have a large disastrous outcome.

I was asked if I were able to send one sentence on a post card to one character in this book what would it be? My answer is this:

It is truly a gift to see a beauty most rare, in all it's hidden and undeveloped forms, which is so very visible when seen through the eyes of the One who created us in His image.

This is the heart of this book, if you ask me, and a book worthy of reading. 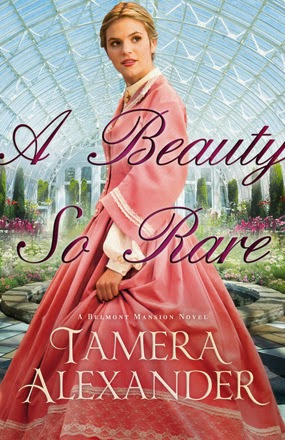 Pink is not what Eleanor Braddock ordered, but maybe it would soften the tempered steel of a woman who came through a war--and still had one to fight.
Plain, practical Eleanor Braddock knows she will never marry, but with a dying soldier's last whisper, she believes her life can still have meaning and determines to find his widow. Impoverished and struggling to care for her ailing father, Eleanor arrives at Belmont Mansion, home of her aunt, Adelicia Acklen, the richest woman in America--and possibly the most demanding, as well. Adelicia insists on finding her niece a husband, but a simple act of kindness leads Eleanor down a far different path--building a home for destitute widows and fatherless children from the Civil War. While Eleanor knows her own heart, she also knows her aunt will never approve of this endeavor.
Archduke Marcus Gottfried has come to Nashville from Austria in search of a life he determines, instead of one determined for him. Hiding his royal heritage, Marcus longs to combine his passion for nature with his expertise in architecture, but his plans to incorporate natural beauty into the design of the widows' and children's home run contrary to Eleanor's wishes. As work on the home draws them closer together, Marcus and Eleanor find common ground--and a love neither of them expects. But Marcus is not the man Adelicia has chosen for Eleanor, and even if he were, someone who knows his secrets is about to reveal them all.
From USA Today bestselling author Tamera Alexander comes a moving historical novel about a bold young woman drawn to a group of people forgotten by Nashville society--and to the one man with whom she has no business falling in love.

Tamera Alexander is a bestselling novelist whose works have been awarded or nominated for numerous honors, including the Christy Award, the RITA Award, and the Carol Award. After seventeen years in Colorado, Tamera and her husband have returned to their native South...
Continue reading about Tamera Alexander

Next, there is a Scavenger hunt in progress:
http://tameraalexander.blogspot.com/2014/04/pinterest-scavenger-hunt.html

Link to the mansion with photos:
http://belmontmansion.com/

I wish to send special thanks to Amy Green - Bethany House Publishers for my copy of this book in exchange for my review, and to Tamera Alexander for her work, and the opportunity to be in such an amazing blogging group. I have greatly enjoyed this experience!

What a thoughtful review! I liked that you focused on a theme among several that resonated most with you :)

Thank you so much Heidi! I really appreciate your reading my review and noticing. :)