Ah!! Here we are with the newest series by Steven James. Placebo is the first of the Jevin Banks Novels. With out dropping the energy or pace that is Mr. James's writing style, we enter into a new series. Jevin Banks is a magician, an illusionist, a self made man with plenty of resources both financial and the people he needs when he needs them. However, he is a tortured one.

This story opens with him at the scene of an accident or possibly it is a crime. It is not just any scene though. This is the death of a mother and two twin boys. Horrible to start with, but worse yet, this was Jevin's wife and children! Life still goes on for Javin, but not with out a million questions and a lot of grief. In trying to survive he is doing "pieces" for TV. with out being on stage doing escapes, acts or shows. Jevin is stuck in his pain that hasn't healed, making it hard to move forward or see a future because he is constantly drowning in his past.

For this assignment Jev and his lovely long-time assistant and friend, decide to do a bit of research on a Dr. Tanbyrn. Jevin and Charlene travel to a research center to be part of a study of how positive thoughts effect people who are in love. Here in spa like settings that are also medical and Spiritual settings as well, they must faking being in love in order to be in this study. If they can fake it and they will debunk this place and move onto the next one. Jev figures that since people can get well taking a placebo, then the power of negative or positive thoughts must be somewhat real, all they have to do is prove if this Dr. is a quack or if he is onto something. However, Jevin and Charlene have stumbled into something far deeper than just sending loving thoughts and positive energy to someone you care about. They have wound up deep in the middle of a pharmaceutics drug company's agenda, as well as several people who think they can harness negative and positive energy for their own agendas. Just how much of the power of life and death really is in the tongue, or in the mind?

What I just told you about this book only starts to explain a little of the many characters in this book. It doesn't touch on any of the conspiracy theories, or the folks behind them. Placebo is going to be a very though provoking read for many people. It is filled with the story of people sorting through their pain, and making life and death decisions, even if they are a sociopaths who can't feel feelings. I enjoyed it, and I look forward to the next Jevin Banks book from Steven James! 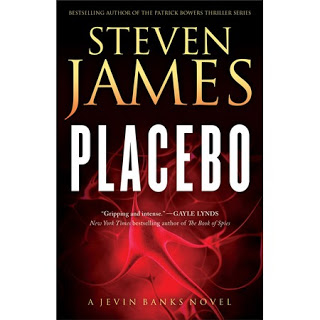 One man must uncover the truth--even when others will stop at nothing to keep it buried.
While investigating a controversial neurological research program, exposé filmmaker Jevin Banks is drawn into a far-reaching conspiracy involving one of the world's largest pharmaceutical firms. He seeks answers about the questionable mind-to-mind communication program--and answers to his own family tragedy.
Rooted in groundbreaking science, Placebo explores the far reaches of science, consciousness, and faith. This taut, intelligent, and emotionally gripping new thriller from master storyteller Steven James will keep you flipping pages late into the night.


About the Author:
Award-winning Author of The Patrick Bowers Files

Steven James has penned 30+ books spanning the genres of psychological thrillers, prayer collections, dramas, monologues, a nine book series on creative storytelling, YA fantasy, and inspirational nonfiction. He has received wide critical acclaim for his work including four Storytelling World Honor awards, two Publishers Weekly starred reviews, and 2009, 2011 and 2012 Christy Awards for best suspense. His latest thriller, The Queen, won a 2012 ECPA Book Award and the 2012 Christy Award for Best Suspense Novel. Steven earned a Master’s Degree in Storytelling from ETSU in 1997 and is an active member of International Thriller Writers, the Authors Guild, Mystery Writers of America, and International Association of Crime Writers.  He is a contributing editor to Writer's Digest, and has taught writing and storytelling principles on three continents.

He lives in the foothills of the Smoky Mountains of Tennessee with his wife and three daughters. When he's not writing or speaking, he's rock climbing, playing disc golf, or (shh....) slipping away to a matinee.

Available November 2012 at your favorite bookseller from Revell, a division of Baker Publishing Group.
Posted by Carol E. Keen at 1:55 PM