A Promise to Protect by Patricia Bradley

Ben Logan, now Sheriff, was just meeting with Tony because he was asked to do so. Tony, his ex-girlfriend's brother, just died in his arms. In the process, he left clues, and a mystery, and extracted a promise from Ben. A promise to protect his sister Leigh, Ben's ex-girlfriend. One large glitch. Protect her from who, and what, and why? Most of all, how to convince Leigh that she needs protection and so does her son TJ.

This is just the very start of mysteries and secrets that are unraveling faster than you can turn pages. One secret leads to another and another and the truth has to start coming out before it's too late for what could have been, what should have been, and what ought to be.

A pretty good paced story that reaches out with a deeper message of forgiveness and healing. Some mystery solving and a good bit of action included with some romance. 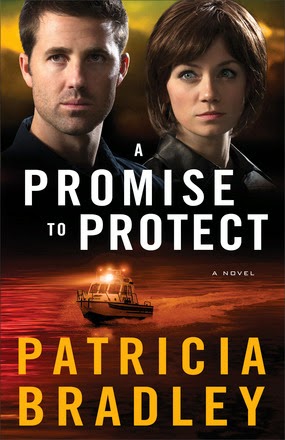 In a steamy small town riddled with broken promises, one woman's secret could change everything.
Acting Sheriff Ben Logan hasn't heard from Leigh Somerall in a very long time, but it doesn't mean he can get her--or their whirlwind romance of ten years ago--out of his head. When she calls out of the blue, it is with a strange request to protect her brother, Tony. But all too soon, Ben is charged with a different task--protecting Leigh from the people after her brother. With Leigh doing everything in her power to avoid Ben, it's no easy task. And the secret she is keeping just may change their lives forever.
"A taut story of mistakes and betrayal, a mother's fierce love, revenge and danger--and the redeeming wonders of faith and love."--Lorena McCourtney, author of the Cate Kinkaid Files and the Ivy Malone Mysteries
"Old secrets, second chances at love, and a skillfully crafted small-town suspense. You will fall in love with Ben and Leigh and cheer them on as they fight for their happy ending. I'm making room on my shelf for all of Patricia Bradley's novels!"--Susan May Warren, bestselling and award-winning author of When I Fall in Love

Patricia Bradley is the winner of a 2012 Daphne du Maurier Award and a 2012 Touched by Love Award and was also a finalist for the 2012 Genesis Award. The author of Shadows of the Past, she is a member of American Christian Fiction Writers and Romance Writers of America. Bradley makes her home in Mississippi. Learn more at www.ptbradley.com.
Want to read some of this book?
http://assets.bakerpublishinggroup.com/processed/book-resources/files/Excerpt_9780800722814.pdf?1405087366

"Heavy on action, Bradley's debut inspirational novel . . . is a page-turner in every chapter . . . culminating in a climax readers won't want to miss It will be gratifying to watch Bradley's characters evolve in future installments of this new Logan Point series."--Publishers Weekly
"This is a fantastic first novel of thrilling suspense. The nonstop action and the sympathetically drawn characters' narrow escapes will keep readers mesmerized. The gripping tension also makes Bradley's title a winner with fans of Iris Johansen and Mary Higgins Clark."--Library Journal
"This crime mystery held my attention with plenty of suspense and just the right amount of romance to spice things up."--Suspense Magazine

"This second book by an exciting new author will delight fans of romantic suspense."