The Secret Keeper by Beverly Lewis

I think I have read some of Beverly Lewis's other books, but this one is more striking. Jenny is a "Englisher", a regular gal growing up in normal America. Only, Jenny simply hates the times she is born in. Maybe it isn't so much a hate, as she just really doesn't fit and and doesn't care for it and since she was about 12 she has been fascinated with the Amish. Deciding that her life is never going to fit, Jenny decided to move to Hickory Hallow and become a Seeker. That means, she is going to see if she can become Amish, Plain, and never again have to deal with the world that she never felt that she fit into to start with. She has left behind her parents, friends and siblings.

Now the question is, will she be able to make it? Will she be able to keep the secrets and make the changes that would let her pass her Proving in order to be a permanent part of this world she so cherishes? Can she change enough to be Amish in actions as well as her Spirit, and learn to speak another language? Will she be loved and fit in, or will her hopes and dreams be crushed if this isn't where God really wants her to be? Jenny has some major challenges because the home she is living in is the home where the famous Katie Lapp use to live, before she was shunned.

The Secret Keeper has a great deal of depth to it, and it I do not regret reading this book. It is not all frilly and glamorous, it is more down to earth and real. 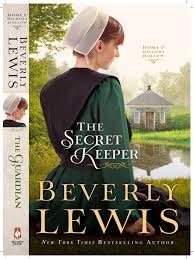 About the Book:
With her love for all things old-fashioned, Jennifer Burns has often been told she's an "old soul," but no one is prepared for the young woman's decision to set aside her modern life in favor of the Old Order Amish world. Yet Jenny does exactly that, adopting Plain dress and settling in with Samuel and Rebecca Lapp while she works as a mother's helper for the bishop's wife--a far cry from her former job as an x-ray technician.
The people of Hickory Hollow are curious about the beautiful young seeker among them, one handsome Amishman in particular. But he is not the only man vying for Jenny's affections, and Jenny faces many challenges in the Proving time the brethren have set for her...challenges of the heart, as well as the spirit.
Will Jenny's secrets keep her from the peace she longs for? Or will they lead the way home?

From the Back Cover:
Come home to Hickory Hollow, Pennsylvania--the beloved setting where Beverly Lewis's celebrated Amish novels began--with new characters and new stories of drama, romance, and the ties that draw people together.
Jennifer Burns shocks her family and friends when she bids farewell to her modern life in favor of the Old Order Amish world, settling in with Samuel and Rebecca Lapp.
The people of Hickory Hollow are curious about the beautiful young seeker among them--one handsome Amishman in particular--and Jenny faces many challenges in the Proving time the brethren set for her...challenges of the heart, as well as the spirit.


About the Author:
Beverly Lewis, born in the heart of Pennsylvania Dutch country, has more than 17 million books in print. Her stories have been published in eleven languages and have regularly appeared on numerous bestseller lists, including the New York Times and USA Today. Seven of her blockbuster novels have received the Gold Book Award for sales over 500,000, and The Brethren won a 2007 Christy Award for excellence in Christian fiction. Beverly and her husband, David, live in Colorado, where they enjoy hiking, biking, making music, and spending time with their family. Learn more at www.beverlylewis.com.


My copy of this book was sent for me for free, for me to review by Bethany House Publishers. Thank you!