When The Heart Heals by Ann Shorey (Sisters At Heart Series)


In When the Heart Heals, Book 2 in author Ann Shorey’s Sisters at Heart series, Civil War nurse Rosemary Saxon wants to use her skills as a healer in the town of Noble Springs. But the townsfolk, and the town's new doctor, aren't sure what to make of her unconventional ways! To celebrate the story, Ann and Revell Books are proud to announce the TEA WITH ROSEMARY giveaway, featuring three incredible prizes.

SECOND PRIZE:
GROW YOUR OWN GARDEN STARTER KIT
Rosemary's garden is a source of healing for many in the town of Noble Springs. Our second prize winner can grow their very own herb garden, from the comfort of their kitchen.

THIRD PRIZE:
ROSEMARY'S KITCHEN PRIZE PACK
Rosemary's hand-blended teas and soaps are sold at the town mercantile and grocery, and are a favorite of several of the town's eligible bachelors. Our third prize winner will have the chance to create their own special tea blends, and enjoy soap just like Rosemary's.

How to Enter:
Go to http://www.annshorey.com/contest.html and click the Enter Now button, anytime between February 15 and March 8.


The first book in this series is Where The Wildflowers Bloom. This book is When The Heart Heals. It picks up with Rosemary's life. Rosemary became a friend to Faith in the first book, and they continue their friendship in this one. Faith is married to Rosemary's brother, Curt. Rosemary is a strong woman, she worked as a nurse in the war. Now that job is not seen as acceptable  so her reputation with some is less than stellar, even though Rosemary has done nothing to deserve this kind of rejection except to try to bring more husbands and sons back home alive.

Rosemary is in need of work, and frankly protection, but she hasn't admitted the latter. She winds up working with Dr. Stewart as his nurse. This is quite unheard of, but what else is she to do? This is what her training is in, and she is considered old at 27 with out a husband. In spite of her strength and temper, she has someone harassing her. She hasn't complained or voiced her duress, but when given the change to help a young un-wed mother, she shockingly did that as well, even on her limited tiny fiances! Rosemary simply doesn't want to move into the house with her brother and sister-in-law, no matter how much she loves them, she would like to be able to survive with out that kind of assistance. Before long she is getting strange misspelled and threatening notes on her door step threatening her to stop using "witches brew" but all she uses is herbal treatments. The folks who use them come to her and to Dr. Stewart for double help in many cases. Now Jake is wanting to court her and she can't figure out other than the one month on the medical field during the war why she would be so drawn to Dr. Stewart.

Now with the threatening situation increased, will it take all she has to decide to stand and stay in town and keep being a nurse and seeing Elijah Stewart, or she will have to leave all she knows and loves behind again.

I enjoyed this book, possibly even more than the first one. It stands alone just fine, but it also ties in very nicely to the first book in this series. I like how strong, but yet real Rosemary was portrayed  and the deep flow of forgiveness and healing that runs through the sub-plots or issues in the book. 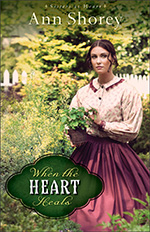 Courageous and unconventional, Rosemary Saxon served as a nurse during the Civil War, a service that has caused most women in town to regard her as unfeminine and downright vulgar. Although she would like to put her experiences as a nurse behind her, she must support herself. Rosemary takes a position with Dr. Elijah Stewart and a mutual attraction begins to develop.

But when a sophisticated woman arrives in town claiming to be Elijah’s fiancée, a heartbroken Rosemary decides to leave Noble Springs and start fresh. Can Elijah convince her of the mystery woman's deception before he loses her forever?

Return to the town of Noble Springs, Missouri, for an engrossing story of love’s tentative first steps and fragile future in the face of opposition. Readers will find in Rosemary a sympathetic but strong woman determined to thrive in a world that doesn’t always understand.

Book Info & Sample Chapter: Can be found at http://www.annshorey.com/novels.html

About the Author is huge, and worth reading! Check it out - http://annshorey.com/bio.html

Available February 2013 at your favorite bookseller from Revell, a division of Baker Publishing Group

Carol, Thank you for the great review. I'm delighted that you enjoyed When the Heart Heals!
Thank you, too, for featuring the contest on your blog.
Many blessings!