The Orphan King is the first book in this series. In The Fortress of Mist we continue with out missing a beat in the story of Thomas and his life and friends, and his enemies. Thomas now has the throne, but there is a lot more that comes with this throne than he ever pondered in the days when his much loved Sarah trained him for the destiny he was meant to fulfill.

Druids - a word that evokes fear and death, a group of people who are evil and wield a good deal of power. Who is among them and who is not? Thomas of Magmus is now in a fight for his kingdom, as well as his soul. He has a wonderful Pastor who he has been conversing with, but he has not yet made a commitment to where his loyalties will lie. The Earl Of York is in power over him, and they are under the King Edward II.
Oh but it is not that simple. The Earl of York professes to be a friend, yet wears a ring of the probably foe, and he could yet be a traitor waiting to kill him in battle. Battle?! Oh yes. King Edward II has sent The Earl of York and Thomas of Magmus to fight the Scotts who are nearby. Thomas was able to win Magmus with out loosing a single life, so can he do that again? Can he protect those he is suppose to protect, guard his heart and sort out his friends from his enemies before all is lost?

This second book in this series picks up and just takes off! I was reading pages faster than I even realized!
Major issues will to light, and all will fall or rise based on where hearts are committed  I really enjoyed this book. I also found out that this series is suppose to be a revised and expanded version of The Winds of Light Series - Magnus, which just makes me want to go read those too! 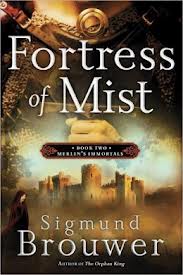 The throne is redeemed, but the battle is just beginning.

In the dark corners of an ancient land, evil lurks in the shadows. Powerful druids haunt the spaces of their lost territory. Double-minded noblemen fight for domain and influence. Invaders from the north threaten the kingdom of Magnus. This land of promise and redemption is mired in deceit and corruption.

The Orphan King, once victorious in conquest, appears to be losing his grip on his seat of power. Thomas rules Magnus, but does not know whom he can trust. His enemies anticipate his every move, thwarting him at each turn. Something is not right.

Under attack, both in the supernatural and natural worlds, Thomas must reach back into the secret layers of his past to find the strength and wisdom to fight his battles. When the mist clears, who will stand with him?

About The Author:
With three million books in print, SIGMUND BROUWER is the best-selling author of dozens of popular books for children and adults. An acclaimed storyteller and passionate reader, Brouwer brings his characters to life with the desire to give voice to truth. Over the last two decades, his Rock and Roll Literacy presentation has inspired students and teachers at schools all across North America. Sigmund is married to songwriter recording artist Cindy Morgan. The couple and their two young daughters divide their time between Red Deer, Alberta and Nashville, Tennessee.

In conjunction with the CSFF Blog Tour, I received a free copy of this book
from the publisher.