First of all - guess what? You can win copies of both the books in this series! Just follow this link after you check out my reviews. *wink*
http://suzannewoodsfisher.com/blog/2013/02/introducing-a-new-home-for-lily-plus-enter-to-win-a-copy-of-both-lily-books/

Here is my review for the first book: Life With Lilly

In A New Home For Lily, Lily Lapp has had to move to Pennsylvania with her family. She left behind her friends, and her beloved pony. Life where she is now is changing, and that rather rapidly. Lily has a new teacher, a new nemesis, Effie, who is often verbally mean and plays tricks on her. Then there is the most upsetting boy the world to deal with as well, Aaron Yoder. Her clothes are different because the Order here has slightly different rules. They have farming issues, working issues, and house issues to sort out. At least her Grandmother is close by!

Lily's working so hard to wait for her new doll to get Plain clothes, and then not being able to have her really tore at my heart. When Effie did what she did with the beautiful paper dolls, I almost cried also. I loved the sweet cows, and the event-filled night in the barn. Oh, and that dangerous sawdust! Aggg! The sticker fun was great, and something I made as a child. The baby goats were just as darling as my own baby goats I have raised. Lily's pondering at how adults do things, well, I thought a few things like that as a child too.
And at last came along Lily's next little brother. Oh my! God didn't send her a baby sister, and that wasn't the easiest thing in the world to deal with, and he got a name she didn't like to top that off! (I know that feeling too as I had some very *strong* ideas about what gender my sibling was suppose to be when I was half of Lily's age!) Starting all over isn't as easy as Lily wishes it were, but day by day she is learning there is a Plan for her life, and a big God watching over them all.

I very much enjoyed this second book in this series. It reminds me of my upbringing, and it also reminds me of an Amish "Little House On The Prairie . I simply loved reading those books growing up, and I would love to one day have my own children to read this series to as well. So far the deeper this series goes, the more fun it is! 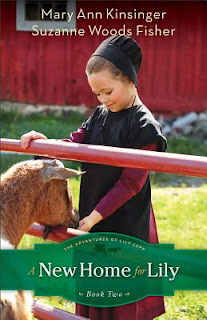 Book 2 in The Adventures of Lily Lapp series. Change is all Lily faces when her family moves to an Amish community in Pennsylvania. She has to make new friends, settle into her new home—which she thinks is ugly—and adjust to another new baby brother. (Still no sisters!) Even worse, a boy at school, Aaron Yoder, enjoys tormenting poor Lily. There are some bright spots about Lily’s new home—she has a wonderful teacher, and her relatives have moved close by. But there are a few lessons Lily needs to learn about starting over. Read an excerpt.
About the Authors:
Mary Ann Kinsinger was raised Old Order Amish in Somerset County, Pennsylvania. She met and married her husband, whom she knew from school days and started a family. After they chose to leave the Amish church, Mary Ann began a blog, A Joyful Chaos, as a way to capture her warm memories of her childhood for her own children. From the start, this blog found a ready audience and even captured the attention of key media players, such as the influential blog AmishAmerica and the New York Times. She lives in Pennsylvania.

Suzanne Woods Fisher is the bestselling author of The Choice, The Waiting, The Search, The Keeper, and The Haven, as well as nonfiction books about the Amish, including Amish Peace. Her interest in the Anabaptist cultures can be directly traced to her grandfather, W. D. Benedict, who was raised in the Old Order German Baptist Brethren Church in Franklin County, Pennsylvania. Suzanne is a Christy Award nominee and is the host of an internet radio show called Amish Wisdom. She lives in California.
The Book Link: http://www.amazon.com/New-Home-Lily-Adventures-Lapp/dp/0800721330
Available Febuary 2013  at your favorite bookseller from Revell, a division of Baker Publishing Group.
Posted by Carol E. Keen at 12:14 AM

Thanks for doing this sweet review. I'm so glad you enjoyed the book!

You are so welcome! I really am enjoying this series! Thank you for letting us review your books.
Carol :)