Today's book is Vanished, by Irene Hannon. Vanished is what happened to the lady that Moira hit with her car, or did she? She is starting to think she lost her mind, but she just can't let this go with out checking. After all, she is an investigative reporter, and getting to the bottom of things is a part of her. Since her memory hasn't been tampered with before, she takes it upon herself to hire a P.I. to help her solve this mystery, or at least get her mind to leave it alone.

Cal Burke is former police force, and like his friends who work with him, they all have pretty solid and hefty backgrounds. Cal's wife has been dead for a while, but he hasn't been able to move on. Then in walks Moira, a woman with strength, beauty and brains, but with a case attached to her that would make most men run away, or think she belongs in a mental ward. Cal takes on checking into Moira's case Pro-Bono as she is with out the funding it would take to dig into this. However, the more Cal digs, and the more Moira digs, the more awful things keep being uncovered. What if Moira isn't nuts at all, and a woman was killed and she just vanished. Where are the threads of her life, the traces to follow and the killer, he has to be found.

Vanished was a good read, with lots of details about the characters and places they went. The romance wasn't too much, it was very light in its own way so that it doesn't overshadow the main events - finding out if there is a killer, who, and why. God will need to be protecting them if the one the suspect is the one behind the murders. 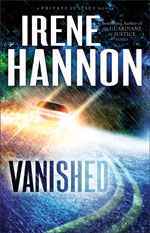 
Vanished
Revell, ©2013, ISBN 978-0-8007-2123-7
(Book 1—Private Justice)
Reporter Moira Harrison is new on the job in St. Louis, but she’s no rookie to investigative reporting. She knows how to dig for answers and get results. But when she hits a pedestrian on a rainy night in a wooded area—only to have both the victim and the good Samaritan who stopped to assist disappear—she turns to P.I. Cal Burke, an ex-homicide detective, to help her sort out the puzzle. Cal is more than a little skeptical of her story, especially since the police have dismissed it. But as clues begin to surface, bringing them closer to answers, the danger mounts. Because someone doesn't want this mystery solved—and will stop at nothing to protect a shocking secret that will destroy a life built on lies.


Irene Hannon is a bestselling, award-winning author who took the publishing world by storm at the tender age of 10 with a sparkling piece of fiction that received national attention.

Okay…maybe that’s a slight exaggeration. But she was one of the honorees in a complete-the-story contest conducted by a national children’s magazine. And she likes to think of that as her “official” fiction-writing debut!
Since then, she has written more than 40 romance and romantic suspense novels. Her books have been honored with two RITA awards—the “Oscar” of romantic fiction—and she is a six-time finalist for that prestigious honor. Her books have also won a Daphne du Maurier award, a Carol award, a HOLT Medallion, a National Readers’ Choice Award, a Retailers Choice Award and two Reviewers’ Choice awards from RT Book Reviews magazine. One of her novels was also named by Booklist as one of the top 10 inspirational fiction books of 2011.

Irene, who holds a B.A. in psychology and an M.A. in journalism, juggled two careers for many years until she gave up her executive corporate communications position with a Fortune 500 company to write full-time. She is happy to say she has no regrets!
In her spare time, she enjoys cooking, gardening and singing.  A trained vocalist, she has sung the leading role in numerous musicals, including “South Pacific,” “Brigadoon,” “Oklahoma” “The King and I” and “Anything Goes.” She is also a soloist at her church.

When not otherwise occupied, Irene and her husband enjoy traveling, Saturday mornings at their favorite coffee shop and spending time with family. They make their home in Missouri.


Find out more at the Author's Web Site: http://www.irenehannon.com/vanished.html

Available January 2013 at your favorite bookseller from Revell, a division of Baker Publishing Group!
Posted by Carol E. Keen at 4:21 PM