The second book in The Solitary Tales series - Gravestone. Due to my reading schedule I have not been able to read this book like I want to, but I will be catching up as fast as possible!
The first book's info can be seen HERE! 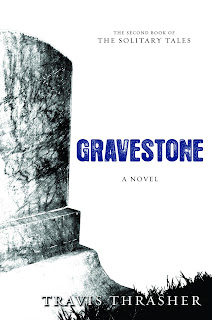 
His Fear Will Soon Turn to Anger….
At first, Chris Buckley was simply warned. And watched. But as Chris unravels the haunting riddles of the town of Solitary, he finds that much more than the life of a town is at stake.
Whether facing a pastor with a house full of skeletons or a cousin he never knew existed, Chris is forced to choose between light and darkness, life and nightmarish death. Every choice he makes reminds him that the unthinkable has already happened—and if he trusts the wrong person, it may happen again.
This second book in the Solitary Tales continues Chris’s journey toward finding out who he is and what his own role is in the darkness suffocating his tiny new hometown. Filled with shocking twists, Gravestone is a tale of a teenager thrown into a battle over a town, a secret—and ultimately his own soul.

After college, he targeted working in the publishing industry and was fortunate to find a job early after graduation. He worked as Author Relations Manager for Tyndale House Publishers, the publisher of his first two novels.
The thirteen years he spent working in author relations taught him the business of publishing as well as the psyche of writers.
Early on, he made a deliberate choice of not wanting to be boxed in by a brand or a genre. Instead, Travis has chosen time and time again to write the stories that mean something to him at that moment. He views his first ten years of being published as training and practice. Those novels in many ways were written for himself.
The four years of writing full time have taught him the discipline and determination necessary to make it as a novelist. They’ve also served to close the chapter on what is hopefully just one era in his writing journey.
The stories continue to fill his head like they did when he was in third grade. The only difference is that Travis now knows what to do with those stories. His goal continues to be to tell stories that move him as well as his readers. He wants to continue to experiment and take risks, but more than anything he wants to provide readers a satisfying experience.
The dream remains the same. To try and write something magnificent. To make up wild worlds full of wonderfully rich characters. To make sense of the world through the stories he tells. And to try and inspire hope with the words he writes.