Ahhh! My first book by J. Mark Bertrand was Back On Murder.  That review is found here:
http://carolkeen.blogspot.com/2010/07/back-on-murder-by-j-mark-betrand.html
I enjoyed that book, but better still is this one. The second book in the Roland March Mysteries series, Pattern of Wounds features detective Marsh, who we met in the first book. No worries, this book stands alone very well.

I throughly enjoy Mr. Bertrand's easy method of putting is right at home in Houston, Texas. I have visited Texas a few times in my life, but I like how well he wrote it into March's home town. While coping with Christmas in a town that is so hot that Christmas always feels like it is in July, a rather pretty young lady is murdered. The problem is the victim was posed, and there is a pattern of wounds on her body that just will not let March alone. He can't help but keep feeling that this is a copy-cat murder, but no one but him sees that. It even gnaws at his gut so bad that it is enough to make one wonder if the wrong man went to prison 10 years ago.

Complicating things even more, the sweet couple that live in the garage apartment are going to have a baby. This is ripping open the depth of unhealed wounds for March and his wife Charlotte. Carter and Gina aren't trying to hurt, they are just clinging to God and well, having a child. If March and Charlotte hadn't lost their daughter it would be quite different. Right soon March resents his friends for Charlotte opening up to them when she hasn't been opening up to him. So in the process of trying to sort out the deaths, and the murderer, we learn a great deal more about March and his past, and the depths of pain that he hasn't even begun to deal with like he should yet.

I'll be back to add any extra thoughts as soon as I finish the last few chapters.

This week, the
Christian Fiction Blog Alliance
is introducing
Pattern of Wounds
Bethany House (July 1, 2011)
by
J. Mark Bertrand
ABOUT THE AUTHOR: 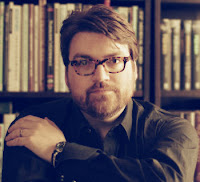 J. Mark Bertrand lived in Houston, where the series is set, for fifteen years, earning an MFA in Creative Writing at the University of Houston. But after one hurricane too many he relocated with his wife Laurie to the plains of South Dakota. Mark has been arrested for a crime he didn't commit, was the foreman of one hung jury and served on another that acquitted Vinnie Jones of assault. In 1972, he won an honorable mention in a child modeling contest, but pursued writing instead.

It's Christmas in Houston, and homicide detective Roland March is on the hunt for a killer. A young woman's brutal stabbing in an affluent neighborhood bears all the hallmarks of a serial murder. The only problem is that March sent the murderer to prison ten years ago. Is it a copycat -- or did March convict the wrong man?

Alienated from his colleagues and with a growing rift in his marriage, March receives messages from the killer. The bodies pile up, the pressure builds, and the violence reaches too close to home. Up against an unfathomable evil, March struggles against the clock to understand the hidden message in the pattern of wounds.


If you would like to read the first chapter of Pattern of Wounds, go HERE.