Doctor Who: The Drosten's Curse by A. L. Kennedy

I never get tired of Dr. Who. This book features the 4th Doctor. He happens to be Doctor that I watched first. That made this book even more fun for me. In this book the Doctor is with two other companions, because it is set between time frames in the TV series.

The Doctor and his friends find themselves up against an issue.  This luxury golf course, the Fetch Brothers Golf Spa Hotel, is having major issues. Something evil is breaking up marriages, causing memory issues, confusion, memory loss, using telepathy and in short, causing chaos. Having a man being slurped away while playing golf didn't help matters, and is very bad for business. (Deadly series game, that golf!) Thankfully, we have the good Doctor here to remedy this situation!

My much loved TARDIS had a huge, and very likable role in this book.

Is the alleged monster what is doing this, or is the creepy owner or her twin grand-kids? This one is deep enough to spook even the Doctor himself! I must also add, that I like the cover.

My copy came from Blogging For Book in exchange for my honest review and nothing more. 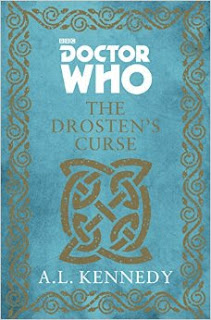 From award-winning author A.L. Kennedy, an original Doctor Who novel featuring the beloved Fourth Doctor, as played by Tom Baker.
“I shall make you the jewel at the heart of the universe.”

Something distinctly odd is going on in Arbroath. It could be to do with golfers being dragged down into the bunkers at the Fetch Brothers’ Golf Spa Hotel, never to be seen again. It might be related to the strange twin grandchildren of the equally strange Mrs Fetch--owner of the hotel and fascinated with octopuses. It could be the fact that people in the surrounding area suddenly know what others are thinking, without anyone saying a word.

Whatever it is, the Doctor is most at home when faced with the distinctly odd. With the help of Fetch Brothers’ Junior Receptionist Bryony, he’ll get to the bottom of things. Just so long as he does so in time to save Bryony from quite literally losing her mind, and the entire world from destruction.

Because something huge, ancient and alien lies hidden beneath the ground and it’s starting to wake up…
Posted by Carol E. Keen at 7:01 PM