I'm going to start this review with the fact that we are missing out on this great author! I wound up with this book from Story Cartel in exchange for my review. I had no idea I had "stumbled" into a fantastic book that is more than worth sharing! In fact, upon finding out today that Bane is on sale for $0.99 - I snatched it up quickly! Now, onto Amari! 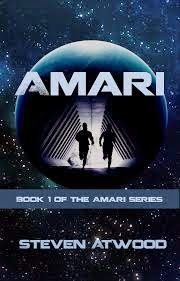 Amari is on her "last" mission. She lives in a world that is just about post apocalyptic in thinking. The government is "god". All other Religions, especially Christians are forbidden. Pray is taboo, and as in the days of old when Jews or Christians were killed for believing in God, so it is in Amari's world. In fact, praying or talking about praying, or God will get you transported to a re-education facility. If only that were the real extent! It turns out that they are death camps, just like when Hitler killed so many, many Jews.

Among those who lost family, is a young man, Colin, who turned in his own family, thinking that he was doing "the right thing". He has been haunted by his beloved sisters face when they took her away. Now, all these years later, he still works for the United Nations (UN). Colin is coming to the realization that not all is as he has believed that it was. He is called to work on a case where a female named Cloee was headed for the death camps, but has instead disappeared. When he sees her image, he sees a face that could be his sister!!! Colin's whole world is being shaken.
Meanwhile, Amari, our space pirate and captain of her own ship, has Cloee in her hold. She was told to pick her up off a very lightly guarded ship, and she did so. Things being as they are, Amari finds Cloee to be a very intriguing person. She is willing to defy all, to pray for her and answer her questions when she has no one else to turn to. Cloee holds no malice, and while on board Amari can ask her about things that she can't ask of anyone else.

Cloee grew up off Earth and she isn't sure what she did that was so wrong, or what is in store for her future. She has at parent in a powerful position, who might, or might not be protecting her. Amari is smack in the middle of all this, and she decides that Borrris could have more than just a working relationship with her. She is his boss, but there is the concern about Cloee. She is suppose to be their last gig before settling down to a pleasant life.
*Nothing* about this mission is what it seems, and the more I read, the better this book got and the more impressed I became with the way truth was worked into this plot! I'm looking for the next book in this series. Frankly I need a way to sign up to know when it is released! I HIGHLY recommend reading this book, which just almost should be required reading!!!

My life had its ups and downs, like most people. Along the way, I met my beautiful wife who saved me. I was in the darkest part of my life at the time, practically lived in seclusion even though I had a roommate. I smoked, drank very heavily, believed everyone owed me something, and I had a dead end job. My life was spiraling into the abyss, until I met her. To make a long story short, she reached into a bucket of sludge, picked me up, hosed me off, and married me. She never asked me to change, but her example and my love for her made it my priority.
Why do you write? I just really enjoy writing. I love the idea of telling stories and I want them to have some meaning. I think a good story should make you think or encourage you to reflect, but this should never take away from a great story.
What do you write? The premise is that no matter long ago in the past or how far into the future, the…Read more