The Dance by Dan Walsh and Gary Smalley (The Restoration Series)

The Dance is about Jim and his wife Marilyn. Marilyn has had it and she has left Jim. She can't take her husband not letting her live a life where he loves her. She isn't divorcing him, if he can straightened out, but she is moving into an apartment and doing something she has wanted to do her whole life - learn to dance.

Frankly, her husband, like many others, is a jerk. He is focused on his needs, his wants, and himself. Not on her needs, or communication, or what his life will be like if he is with out Marilyn. And the wife, well I can tell you from the other things I have learned that the wives had to be willing to let God move and let their husbands win their hearts back, if the man is series about it.
I would very much like to read the DNA of Relationships now. Once I read it I will know if I need to add it to my list of books that we wives need to read in order to see if our spouses will become the Godly men they are meant to be! So very many of us are in "dead" marriages. Finding ourselves married with out a marriage. Part of us have wound up divorced because of that, but if the husband will wake up and turn - God can do all sorts of wonderful things!

One of these days I will share my story with you. Until then I am right in there with Marylin and each of my dear friends like her, tears and prayers included. 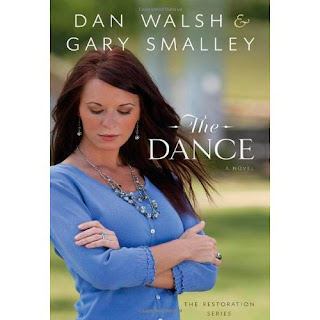 From the Back Cover:
After 27 years of marriage, Marilyn Anderson is tired of playing the role of perfect wife. Her husband Jim is a successful businessman who gives her everything she needs--a beautiful home in an upscale neighborhood, the financial freedom to be a stay-at-home mom, an enviable collection of stuff. Everything, that is, except what really matters: love.

After years of trying to connect with Jim, Marilyn has had enough. She longs to experience some measure of happiness before she's too old to enjoy it. Needing some time to herself to sort things out, Marilyn leaves to start a new job and take dancing lessons--something she has wanted to do for as long as she can remember.


Shocked to find his wife gone, Jim Anderson must sort through the past to save his marriage. With a little help from an unexpected ally, he begins a campaign to win Marilyn back. What he doesn't anticipate is how his actions will affect everyone around him--starting with himself.

Combining the literary talents of bestselling author Dan Walsh and the relationship expertise of bestselling author Gary Smalley, The Dance is the first novel in The Restoration Series. Readers will get caught up in these flawed but sincere members of the Anderson family as they rediscover genuine love and start a transformation that ultimately affects all of them.

Gary Smalley is one of the country's best-known authors and speakers on family relationships and has appeared on national television programs such as Oprah, Larry King Live, andTODAY, as well as numerous national radio programs. He is the bestselling and award-winning author or coauthor of many books, including the Baxter Family Redemption series with Karen Kingsbury. Gary and his wife, Norma, have been married for 40 years and live in Missouri.

Dan Walsh is the bestselling author of several books, including The Discovery and The Reunion. He has won three Carol Awards, and two of his novels were finalists for RT Reviews Inspirational Book of the Year for 2011 and 2012. A member of American Christian Fiction Writers, Dan served as a pastor for 25 years. He lives with his wife in the Daytona Beach area, where he's busy researching and writing his next novel.
“Available April 2013 at your favorite bookseller from Revell, a division of Baker Publishing Group.”