The Bright Empire Series is just as interesting and though provoking as the first books I read by Mr. Lawhead.(See below!)  Before you read The Spirit Well, you should read the first two books in the series first. You can learn a bit more about them on my reviews. The Skin Map is the first book, and The Bone House is the second. {You can also find more about them on Stephen Lawhead's web page. }

In The Spirit Well we come back to Kit Livingstone. Kit is still living with the super intelligent, telepathic, yet rather Neanderthalic creatures he wound up with from his last traveling trip. He has been learning so much from them! He has spent a good bit of time in the Bone House, and now... well now Kit has seen The Spirit Well! The Spirit Well, or the Well Of Souls is fascinating but Kit is still putting this all together.What he saw there and what it means, how it ties or doesn't tie into his travels is a bit murky. Ley line travel is still new to him, and to his friends who are in other places trying to find him. Such as Mina. In her search to find Kit she has traveled to a Monastery. There a man named Brother Lazarus has started sharing with her.

In this book we see our main characters grow, we get background and other important information. We have new people to meet! Others have stumbled upon ley lines, such as an "bone digger" (paleontologist) named Catherine. The bone digging opening was, to me, a fun touch! The new people we meet in this book who have found ley travel now their lives are changed as well. Lots of going-ons are in Egypt. This includes the coming of a new God that seems to be the only One to serve. Even so, some of the new converts are killing those who don't follow! Yikes! So is the real God we know, or another one of those gods that come and go and aren't the One real God? We have to dig into the past to understand some of the future, and this book does that for this series, as well as some lovely ways to ponder ley travel in depth.

If this book feels a little slow to you while yet careening through a multidimensional universe, then just know that it is about to be the foundation on which the next books sling-shot forward. I am happily waiting for all the rest of this amazing series!

Those who know me, or know me well, know I am extremely fond of Stephen R. Lawhead's work. The first time I read his books, they came from a salvage store! A Christian book store had gotten a great deal of damage and thus their stock was sold off and wound up at the store I was in. At my finger tips were all three book in the Song Of Albion series. I first picked up The Paradise War and then finding on the shelves the other two books in the series I got them all. After all, we were on a ministry trip and would be there a while and I was out of reading material. As soon as I started reading, I was hooked! I think you will be too! 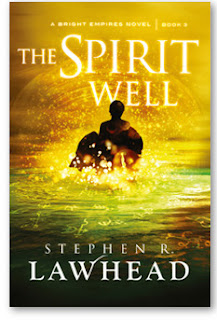 The search for the map—and the secret behind its cryptic code—intensifies in a quest across time, space, and multiple realities.

But what if the true treasure isn’t the map at all . . . what if the map marks something far greater?  Something one world cannot contain? Those who desire to unlock that mystery are in a race to possess the secret—for good or evil.

Kit Livingstone is mastering the ability to travel across realities using ley lines and has forged a link from the Bone House, a sacred lodge made of animal bones, to the fabled Spirit Well, a place of profound power.

His friend Mina is undercover in a Spanish monastery high in the Pyrenees, learning all she can from a monk named Brother Lazarus. Still determined to find Kit, she is beginning to experience a greater destiny than she can fathom.

In conjunction with the CSFF Blog Tour, I received a free copy of this book from the publisher. (For which I am thrilled, thankful and happy about!!!)

I'm always surprised to read that some thought this book moved slowly. It didn't for me, but I'll grant that there were no great confrontational scenes between the protagonists and antagonists. I find it interesting that the cast is growing on both ends!

It was not slow for me at all! To me it picked up and just went from there.. but I noticed lots of people think that it is slow, so I wanted to encourage them. Did I get that conveyed properly? (I hope so!)
Carol :)