Today is about Words Spoken True by Ann H. Gabhart. Adriane Darcy has grown up in the Newspaper business because of her Father. She has been drawn to writing and stories for as long as she can remember. The only problem with that is that in the day and age she is in, a lady isn't in this kind of work! She should be at home cooking or married and raising a family, not wanting to involved in a newspaper. That would just be close to scandalous! Crime and politics are things a lady shouldn't think of much less dream of writing about or getting a "scoop" for a breaking story.


So to avoid lifelong complications and serious scandals, Adriane's Father starts pushing her to wed her suitor. After all, Stan's Father owns their newspapers's competition. That would look good, and keep her closer to a newspaper with out being in one. But Adriane isn't sure she wants to marry Stan for several reasons and she is a woman who has grit. She likes to defend and stand up for what she believes in and what she feels God wants to her to do. Besides that, there is Blake. Blake her is a rival, and yet a man she is very drawn towards.


While Adriene works to uncover the truth, and pursue her story, she is also working through her own life story of who she will marry, trust and what God has in store for her. The historic part of this book was good, and it had just enough mystery and suspense to make it fun. 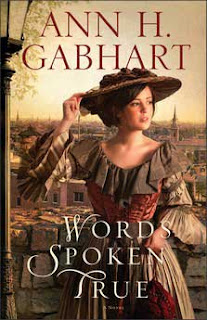 Adriane Darcy was practically raised in her father’s newspaper offices. She can’t imagine life without the clatter of the press and the push to be first to write the news that matters. Their Tribune is the leading paper in Louisville in 1855. Then Blake Garrett, a brash young editor from the North with a controversial new style of reporting, takes over failing competitor the Herald, and the battle for readers gets fierce.
When Adriane and Blake meet at a benefit tea, their surprising mutual attraction is hard to ignore. Still, Blake is the enemy, and Adriane is engaged to the son of a powerful businessman who holds the keys to the Tribune’s future. Blake will stop at almost nothing to get the story–and the girl. Can he do both before it’s too late?
Set against the volatile backdrop of political and civil unrest in 1850s Louisville, this exciting story of love and loyalty will hold readers in its grip until the very last page. Bestselling author Ann H. Gabhart once again delivers an enthralling and enduring tale for her loyal and ever-expanding fan base.
The first chapter as well as the Author's web site are here:
http://www.annhgabhart.com/words-spoken-true.html


Available February 2012 at your favorite bookseller from Revell, a division of Baker Publishing Group.
Posted by Carol E. Keen at 2:08 PM