The Realms Thereunder by Ross Lawhead (The Ancient Earth Trilogy)

Welcome to my review of The Realms Thereunder by Ross Lawhead. Ross is the son of Stephen R. Lawhead, who's books I thoroughly enjoy! When I found out that Ross is now writing, I became quite excited because it must be fun to have two good writers in the same family. Ross is a good writer all on his own, so I read this with an open mind because even when there are more than one good writers in a family they can be very different from each other.

As soon as I started this book I got the feel of Stephen Lawhead's current series that I have been reading, The Bright Empire Series. (My reviews on the first two books of that series are here, and here.)  At the same time it quickly becomes clear that we are going to get to enjoy Ross Lawhead's work and watch him grow as a writer as well. For those who don't know, this is Ross's first novel - the debut!

The Realms Thereunder starts with two missing children being found. They have been gone for about two months after vanishing during a school field trip. Daniel Tulley and Freya Reynolds have the same birthday, and apparently, a joint destiny.  While on that school field trip the pair decides to explore an arch. That arch lands them in another realm entirely! Sleeping knights are everywhere, an entire army of them. They are sound asleep, not dead, until Daniel blows a horn and they start waking up! Daniel has no idea that he and Freya have just sent into motion a prophecy that when the knights who are sleeping awake, that the end times have begun. Thus we embark on the first book of a journey that is being taken -like it or not.

Things shift back and forth from current time in Oxford, England and the Realms Thereunder. Most of the transitions are easy enough to follow, especially given that we have come to love this in Stephen Lawhead's books and I was happy to see Ross use that as well.

I want to update this more soon, I haven't been able to finish this book yet because of circumstances beyond my control. 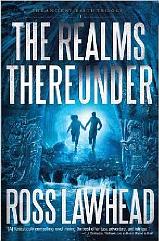 Ancient legend tells of an army of knights that will remain sleeping until the last days.
The knights are waking up.
A homeless man is stalked by a pale, wraithlike creature with a mouthful of needle-sharp teeth. Maimed animals and a host of suicides cluster around a mountain in Scotland. And deep beneath the cobbled streets of Oxford, a malicious hoard besieges a hidden city.
Freya Reynolds is a university student with a touch of OCD and an obsession with myth and folklore. Daniel Tully is living rough on the streets of Oxford, waging a secret war against an enemy only he can identify. Years ago, they found themselves in a world few know is real. They have since gone their separate ways and tried to put that adventure behind them.
But the mythical world is now bleeding into our reality-a dark spiritual evil that is manifesting itself in forgotten corners of the British Isles. Alex Simpson is a Scottish police officer who specializes in hunting mythical creatures. Together, they must confront the past, the present, and points beyond to defeat the ultimate threat to humanity.
Nothing they've seen so far prepares them for what awaits . . . in "The Realms Thereunder."
Book link - http://www.amazon.com/Realms-Thereunder-Ancient-Earth/dp/1595549099
Author’s Web site - http://www.rosslawhead.com/blog/
In conjunction with the CSFF Blog Tour, I received a free copy of this book from the publisher.

I think it will be interesting to watch him grow as an author.