Christmas time in September folks!
A Lancaster County Christmas is an interesting book that is about the right length for a 2 hour read if you read fast. First I will tell you about the story. Jamie is a photographer. One of the reasons I chose this book!
She is married to C.J. and they aren't happy. Mattie and her husband Sol are Amish. Mattie and Jamie meet in the same doctor's office. Mattie is dealing with the fact that she has miscarried another baby, and she wants nothing more than to be a good Amish wife with a big family. Alas, she only has one son and God doesn't seem to be letting her have more. This is causing her great, and deep pain.
Meanwhile Jamie is wrestling with keeping her Father's love, as major job changes so she can be super successful and not just working the Sears Portrait Studio for the rest of her life, and being rather convinced that her husband is having an affair. As God would have it these two couples (and some extra kinfolk) wind up together for Christmas on the Amish farm belonging to Sol and Mattie. Lots of revelations and insite start occurring for both couples.
Now for my thoughts. This was the first book by Suzanne Woods Fisher that I have read. I felt like the Amish  people in the book were more real and portrayed better than the English ones on some levels. I liked all the interaction with the main characters. I was not the least bit happy about that item that was lost, and not found. I would have had to written that detail differently, because that one really really bothers me. Maybe it is because I am also a photographer. Another thing that bothered me is how Jamie and C.J. had all these "problems" and they were all so very very minor. I guess I have dealt with too many problems in my life, and my friends lives, that were not minor at all. That were not fixed at the end of the book, or the end of the "episode". However, the problems that Mattie and Sol were facing were major ones that they had to overcome.  I also feel like lots of things were left open ended or loose. I am not sure if these are things that only notice or not. Over all great strides were made throughout the book, and spiritual growth as well, and the settings were quite good.
One thing I LOVED was all the attention to the animals, and especially Tucker! I have a friend who has a Search and Rescue dog. I have also trained 4 Service Dogs. So Tucker, the baby lambs, the baby owl, none of the wildlife or domestic animals were lost on me. I throughly enjoyed them. And where is that bob cat now anyway???
Carol
The Book: 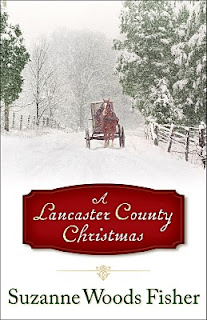 Jaime and C. J. Fitzpatrick began their married life as most couples do--in love and looking forward to a bright future together. But four years later they've drifted apart and are almost ready to call it quits.

Mattie Riehl was hoping to give her husband Sol the Christmas gift they have both longed for--news that a baby was on the way.  But as usual, she is disappointed. The holidays bring an acute awareness to Mattie that her dream of a big family isn't likely to become a reality.
Then a winter storm raging outside blows the Fitzpatricks into the Riehl home--and into a much slower pace of life. Can these two couples from different worlds help each other understand the true meaning of love this Christmas?
With her trademark plot twists and attention to detail, Suzanne Woods Fisher offers readers a beautiful Christmas story of love, forgiveness, and what truly matters in life.
About The Author: 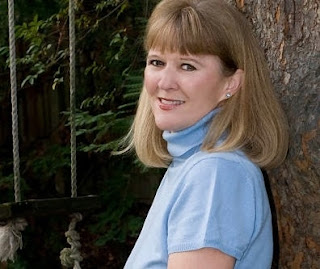 Suzanne Woods Fisher is a bestselling author of Amish fiction and non-fiction and the host of a weekly radio program called Amish Wisdom. She has twenty books under contract with Revell--seven published, thirteen to come...she's contracted all the way into 2016. The Waiting is a finalist for a 2011 Christy Award. The Choice is finalist for a 2011 Carol Award. Amish Peace: Simple Wisdom for a Complicated World and Amish Proverbs: Words of Wisdom from the Simple Life were both finalists for the ECPA Book of the Year (2010, 2011).
Her interest in the Amish began with her grandfather, W.D. Benedict, who was raised Plain. She has many, many Plain relatives living in Franklin County, Pennsylvania, and travels back to Pennsylvania, as well as to Ohio, a couple of times each year for research.
Suzanne has a great admiration for the Plain people and believes they provide wonderful examples to the world.  In both her fiction and non-fiction books, she has an underlying theme: You don't have to "go Amish" to incorporate many of their principles--simplicity, living with less, appreciating nature, forgiving others more readily-- into your life.
When Suzanne isn't writing or bragging to her friends about her first new grandbaby (!), she is raising puppies for Guide Dogs for the Blind. To Suzanne's way of thinking, you just can't take life too seriously when a puppy is tearing through your house with someone's underwear in its mouth.
Keep up on Suzanne's latest news on Facebook, Twitter and on her blog!
Her web site is  http://suzannewoodsfisher.com/
Available September 2011 at your favorite bookseller from Revell, a division of Baker Publishing Group.
Posted by Carol E. Keen at 5:55 PM