FUN!
This book is a great deal of fun. I really enjoyed the back-stages of a small group writing a sitcom.
I found the plot steps fascinating! I didn't have those in college, or in any of my training, so they were quite interesting to me, and they were worked into the book with great skill. Most people might not notice, but because of my background I could tell right off that the author, Janice Thompson had done some TV screen writing prior to Hello, Hollywood! because of way she wrote this book. It makes it just lovely, and none of it was lost on me.
Hello, Hollywood! is a fun easy read, and I really loved the Zeus, the Greek Domestic dog. They are quite a fascinating breed, and as an animal and dog person myself, I had to look up a bit more about them. All the characters were strong. Family, friends, God and solving problems were integral parts in this book. Overall I just liked it, it was fun, well written, fast paced, and sweet. I liked the ending screen play as well.
Carol
The Book: 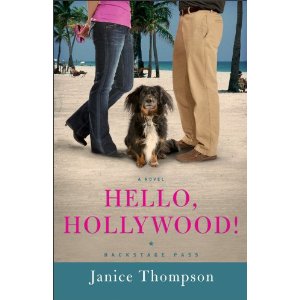 When it comes to love, one thing's for sure--it doesn't follow a script!
Athena Pappas is the head writer on Stars Collide, one of the most popular sitcoms in television history. But when Vegas comedian Stephen Cosse is brought in to beef up the show's suddenly sagging ratings, she starts to worry about her job. Sparks fly as the competition--and attraction--between the two writers heats up. Athena has never had a problem writing the romances of her characters. So why is her own love life so hard to script?

With humor and a Hollywood-insider viewpoint, Hello, Hollywood! delivers lots of laughs as Athena and Stephen discover that not being in control of the plot of their lives might just be the best thing that ever happened to them.

"Romance, drama, fun--Hello, Hollywood! has it all."--Jenny B. Jones, award-winning author of Save the Date and A Charmed Life series

"Thoroughly delightful! A blend of contemporary life and romance with nostalgic snapshots of Hollywood's golden age. Thompson writes with warmth and humor, creating a world we can all escape to for a little while."--Rachel Hauck, bestselling and award-winning author of Dining with Joy
About the Author: 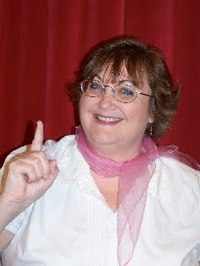 Janice Thompson is a seasoned romance author and former screenwriter. An expert at pulling the humor from the situations we get ourselves into, Thompson affords an inside look at TV land, drawing on her experiences as a screenwriter. She is the author of the Weddings by Bella series and Stars Collide. She lives in Texas.
Available September 2011 at your favorite bookseller from Revell, a division of Baker Publishing Group.
Posted by Carol E. Keen at 11:08 AM

Thank you so much for the sweet review. Glad you enjoy Athena's story. :)