Gripping, moving, and fascinating are good words to start to use to describe Darkness Follows. Mike Dellosso created a drama filled book with this one. On the surface Sam Travis is just your average hard working husband with a daughter until his accident. He starts hearing civil war noises, but scarier yet, he is finding writing that he doesn't remember writing! The darkness is taking over him, while his daughter keeps telling him that she loves him, and that Jesus loves him. Eva says a man named Jacob keeps telling her what to tell Sam.

But Sam isn't listening well, he is consumed in trying to figure out what is real and what he is dreaming. He keeps winding up seeing things that aren't there, or are they? What is his connection to the man in the Civil War he is writing about? In the middle of no one believing him much, and saying that he is getting really scary, now people are being murdered. A killer with out all of his faculties is moving on Sam's trail.

Sam has to find God's love, hear his daughter's love for him and that God has for him before everything has gone way too far, and it is way to late to change. A very dramatic read that touches on some major issues.

This week, the
Christian Fiction Blog Alliance
is introducing
Darkness Follows
Realms (May 3, 2011)

Mike Dellosso
ABOUT THE AUTHOR: 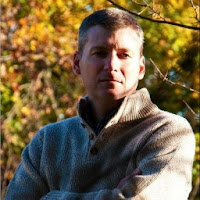 Born in Baltimore, Maryland, Mike now lives in Hanover, Pennsylvania, with his wife, Jen, and their three daughters. He writes a monthly column for Writer . . .Interrupted, was a newspaper correspondent/columnist for over three years, has published several articles for The Candle of Prayer inspirational booklets, and has edited and contributed to numerous Christian-themed Web sites and e-newsletters. Mike is a member of the American Christian Fiction Writers, the Christian Fiction Blog Alliance, the Relief Writer's Network, the International Christian Writers, and International Thriller Writers. His short stories have appeared with Amazon Shorts and in Coach's Midnight Diner genre anthology. He received his BA degree in sports exercise and medicine from Messiah College and his MBS degree in theology from Master's Graduate School of Divinity.

Mike Dellosso writes novels of suspense for both the mind and the soul. He writes to both entertain and challenge. In addition to his novels, Mike is also an adjunct professor at Lancaster Bible College and a faculty member at the Greater Philadelphia Christian Writer's Conference. Sam Travis lives in a Civil War era farmhouse in Gettysburg, PA, where he awakens one morning to find an old journal with an entry by a Union soldier, Lt. Whiting…written in Sam’s own handwriting. When this happens several more times, both at night and during waking “trances,” Sam begins to question his own sanity while becoming obsessed with Lt. Whiting and his bone-chilling journal entries. As the entries begin to mimic Sam’s own life, he is drawn into an evil plot that could cost many lives, including his own.

Can the unconditional love of Sam's daughter, Eva, break through his hardened heart before a killer on the loose catches up with them and Sam’s past spurs him to do the unthinkable?


If you would like to read the Prologue and first chapter of Darkness Follows, go HERE