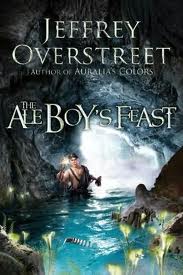 Hello Readers!
Welcome to book four of The Auralia Thread, The Ale Boy's Feast. The first three books in this series are listed below, and linked to my reviews. I had so much happening that I know I didn't give Raven's Ladder near the review it deserves, so maybe I can make up for that now.
Auralia's Colors
Cyndere's Midnight
Raven's Ladder
The Ale Boy's Feast is as delightful as Jeffery Overstreet's other books in this series. This series started with Auralia, a baby found in a footprint. Many say the Keeper sent her. Auralia's special gift of colors captivated us, and made us long for the wrongs of the world she lived in to be righted. Auralia's colors made her sought after by those with both good, and evil intent. The ale boy is a friend to Auralia, and this is where we first meet him. His gift is not colors, it is the control of fire - thus firewalking. As the houses in power start to fall apart, and the earth starts to rip apart as well. Auralia is most likely dead, but the Ale Boy lives.
Having left the House Abascar we move to House Bel Amica and continue with Cyndere's Midnight. Our much loved ale boy was here in this book, but not nearly as much as before, which brings us to Raven's Ladder. Here Cal-Raven, who is a king, is the most important character in this book. I don't recall much mention of our ale boy, but now at last, he has returned!
In a dying world with things going all wrong, the firewalking Ale Boy- now called "Rescue" finds himself front and center. He must lead a rather bedraggled group upstream, in search of answers, hope, and help. The fighting is by no means over, and frankly, things are rather bleak in many areas.
There is indeed, so much going on here, that I can't get it all in this post. Jeffery Overstreet is answering a few of our questions, while leaving us with many that aren't answered, and some that I worry will never be fully answered for us. The Seers, who are quite evil, are still present. Deathweed and the drink that makes people addicted are still around. There is a great deal of fighting, such as we might have expected more of in book 2, or 3, but it came at the end of this series.
This book is still incredible, but you NEED to read the first 3 so that you aren't lost. That is as it should be, in a series, that is held together by threads that aren't all knotted, and more threads that are, so that while we see most of the picture, we don't see it in the whole as of yet.
Carol
About the Book from the back cover:
The king is missing.
His promises lie in ruins.
His people are trapped as the woods turn deadly.
Underground, the boy called Rescue has found an escape.
The world has been poisoned. The forests, once beautiful, are now bloodthirsty.

But the people of House Abascar will risk their lives on a journey through those predatory trees. Inspired by Auralia’s colors, they’re searching for Inius Throan — a legendary city where they can start over again.

But they journey without a king. Cal-raven has lost his faith in himself and in that mysterious creature — the Keeper who inspired him to lead. His broken heart needs a miracle.

What of those Abascar survivors still enslaved to the beastmen? As the ale boy leads them upstream on an underground river, their deliverance depends on a miracle.

And where is the wandering mage, Scharr ben Fray? He’s discovered that the world’s history is a lie, one only a miracle can repair.

Time is running out for all of those whose stories are tangled in The Auralia Thread. But miracles happen wherever Auralia’s colors are found.
In conjunction with the CSFF Blog Tour, I received a free copy of this book from the publisher.

Nice review. Thanks for including the back page description. It helps new readers catch up with the previous books.

I liked the way you worked in the first three titles and mentioned how they built on one another.