Loss Of Carrier by Russ White

Hello Dear Readers!
I have spent many an hour in server rooms. I am not a Network Engineer but I know several of them, I have worked on issues in and with the servers and racks as well. Thus I personally know any well maintained server room is cold and sterile. Most of them are just cold, but what a horrible shock our main character Jess has has! A co-worker is dead, under the flooring wrapped in LAN cables! His next distress is that while he knows he isn't to blame, the police aren't sure, and he is becoming more daily convinced that a murderer is in in one of these offices, someone he works with is a cold blooded killer! But why? It is just a network, nothing major, no mass government secrets or anything else worth killing over.
No sooner is Carl dead and Jess cleared of his death than Leah comes to work there. She can be abrupt, but sweet, and she is very very nosey where Carl's death is concerned. When a second death occurs in the server room the race is for Jess to sort out who he can, and who he can't trust in a company where he thought he knew everyone reasonably well. Jess is starting to feel like he is being framed, but by who and why?
His own past makes him not trust Leah, but are there other reasons he shouldn't trust her? When someone tries to kill both of them it brings "home" more issues for Jess. Jess struggles through praying and his past, and trying to sort out what to do, a killer is still in the company and Jess is growing more sure of it daily. Jess has to find out who is behind this, or die trying.
Loss Of Carrier is a cleverly written, enjoyable book!
I only hope that when my first novel comes out that it is a good as this one!
Carol :) 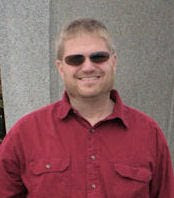 Russ White is an internationally recognized internetwork engineer. He has co-authored eight books in the field of network design and routing
protocols and is a regular speaker at international networking conferences.

In addition to working on several expert and senior-level network engineering certifications, he is a certified firearms instructor.

Russ, his wife, and their two children live in the Raleigh area of North Carolina, where they enjoy spending time on Jordan Lake and attending Colonial Baptist Church. Loss of Carrier is his first novel. 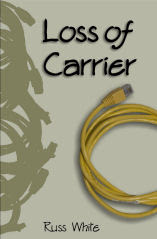 Bright yellow cables against a blue shirt? Carl never would have approved of that color combination. Why was his face so white? His eyes should be closed, not open. Why hadn’t one of the security guards seen this and reported it to the police? The lights were off, the cameras were useless in the dark.

Of course, the cables wrapped around Carl’s neck explained why the server wasn’t working. Loss of carrier.

Jess Wirth lives a dreary life. He spends most of his time crammed inside a cubicle, toiling as a network engineer and stewing over the details of his ugly divorce. But when he finds his co-worker dead in the basement of their office, Jess’s life takes a surprising—and unpleasant—turn.

The police quickly declare the death a suicide, but Jess isn’t so sure. Not long after he begins digging into the victim’s work, another co-worker turns up dead, convincing him once and for all that something sinister is brewing behind the cubicle walls.

His investigation leads him to a mysterious woman name Leah, who pushes him to entrust her with the information he’s collected about his dead colleagues. Wary of Leah’s motives yet inexorably drawn to her, Jess keeps her at arm’s length...until an attempt is made on both their lives. Realizing they are close on the trail of a dangerous criminal, the pair race to expose a data theft ring before they become the killer’s next victims.