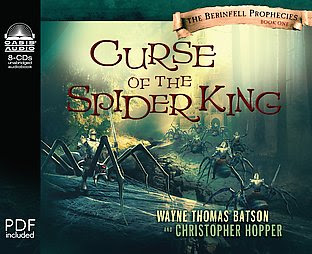 Hello All!!!
This book was thrilling to read! I do want to read the next one! It is quite Epic and totally captivating. I really really liked it! The Spiders are totally creepy, but as a book I loved the neat touch of the pages changing when the Books are read. Want to know what that means? Go read a copy!
Carol :)
Featured book:
Curse of the Spider King - http://www.amazon.com/exec/obidos/ASIN/1400315050
Author and series links:
Wayne Thomas Batson’s blog - http://enterthedoorwithin.blogspot.com/
Christopher Hopper’s Web site - http://www.christopherhopper.com/
The Berinfell Prophecies Web site - http://www.heedtheprophcies.com

The Seven succeeding Elven Lords of Allyra were dead, lost in the Siege of Berinfell as babes. At least thats what everyone thought until tremors from a distant world known as Earth, revealed strange signs that Elven blood lived among its peoples. With a glimmer of hope in their hearts, sentinels are sent to see if the signs are true. But theirs is not a lone errand. The ruling warlord of Allyra, the Spider King, has sent his own scouts to hunt down the Seven and finish the job they failed to complete many ages ago.
Now 13-year-olds on the brink of the Age of Reckoning when their Elven gifts will be manifest, discover the unthinkable truth that their adoptive families are not their only kin. With mysterious Sentinels revealing breathtaking secrets of the past, and dark strangers haunting their every move, will the young Elf Lords find the way back to the home of their birth? Worlds and races collide as the forces of good and evil battle. Will anyone escape the Curse of the Spider King?
A Word from the Authors:

Curse of the Spider King is my sixth novel, but it is the first that I've cowritten. I met coAuthor Christopher Hopper at a publisher's convention in Denver about four years ago. We were, at that time, writing for different publishers, but we just happened to book the same hotel (I think because it was inexpensive. lol) Through a number of goofy circumstances, I ended up meeting Christopher Hopper at one of his events, and it was the strangest thing. I felt like I'd somehow known Christopher for 20 years. We had so much in common, being fantasy writers, but also in terms of faith, music, hobbies, way of thinking...right down to a whacked-Monty Python-meets-John Hughes sense of humor.

Christopher lives in Upstate NY, and I live in Maryland, so we looked for a middle ground where we could get together for "Writers Bootcamp" weekends. Together we worked on our different novels and found it to be extremely rewarding. I still remember walking down the snowy streets of Scranton, puffing out wisps of breath, saying, "Wouldn't it be cool if we could write a novel together some day?" Well, fast forward, and God opened up that door for us.

Readers you should know that this project does not represent two authors writing in two voices. Nor is it more Wayne's style or more Christopher's style. This is "OUR" voice together, and I think it's an improvement over anything we've done alone.

Readers, you should also be warned: we had a hysterically good time writing Curse of the Spider King (and now its sequels). We write using iChat, Messenger, Cell Phone). If you could listen in to our writing conversations, you would hear two fantasy-loving maniacs, cackling away like mad scientists as we create. The result, we think, is a massively entertaining adventure that turns the fantasy "portal story" on its head and asks, "What if a fantasy realm invaded our world?"

Get ready for mysterious events, relentless action, middle-of-the-night chills, and a wriggling, snarling, scratching collection of creatures that is sure to please imaginative readers of all ages.

Please let us know what you think of Spider King. And get ready for the sequel: Venom and Song, due out May 2010.
Fantasy. Mystery. Action. Humor. Parents, teachers, and librarians will no longer have to push kids to read-The Berinfell Prophesieswill engage intermediate readers and leave them clamoring for more.

Learn more about The Berinfell Prophecies at www.heedtheprophecies.wordpress.com. Create your own tribe. Connect with fans through the forum. Win pre-release chapters and the opportunity to have Wayne and Christopher at your very own book party!

Good job Carol. Keep up the blogging and reviewing. This book is near and dear to my heart for a couple of reasons. The authors are both amazing and their collaborative efforts make CotSK something new entirely. I recently scored an interview with WTB and CH. If you get a chance, swing on by and check it out. It starts on day two of the tour and ends on day three. Hope to see you there:

Hi, Carol! Thanks so much for posting. I really appreciate that you took the time to hunt down all that info on Spider King.