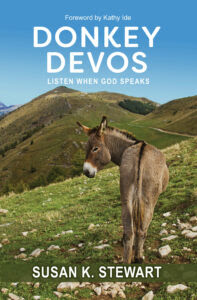 Did you know the Bible mentions only two talking animals? Each of these creatures had a different message. The first to speak out was the serpent. This character certainly wasn’t a model. If God was using this snake for a test drive, I can see why he kept the mouths of the other animals closed. This snake in the grass spoke words meant for evil. Later God allowed another animal to speak—the lowly donkey. The beast of burden. This time the animal had words of wisdom.

Susan K. Stewart expected dogs, cats, and the occasional goldfish would be all the pets she’d need—until the day Susan met donkeys at a rescue center. A few years after that fateful visit, three donkeys became part of the Stewart family. Susan soon learned these humble creatures are still messengers of wisdom.

Donkey Devos is a collection of forty pearls Susan has learned from spending time learning about her equine friends and chatting with them. She uses her experiences, donkey facts, and Biblical donkey details to share the truths God has taught. The whole family will delight in the donkey tales with a message from God.

As Bored as a Donkey

It happened again. We returned home to find Jeb and Neesy at the fence corner by the entrance gate, happily chewing a cardboard box. I failed to put up the warning sign, and the delivery man dropped the package within range of the curious donkeys.

These two seem to like the box best. Other items wrapped in plastic were set aside, or rather kicked aside, so they could get to anything encased in cardboard. By the time we returned home that day, the delivery box was nearly devoured, and they were working on the boxes other items arrived in.

Why are donkeys interested in a cardboard box set by the gatepost? We often question why our donkeys do the things they do.

When we had our three jennies, I noticed they were chewing through the trunk of a downed tree. Concerned about possible side effects, I asked our vet. He said donkeys get bored. Like a six-year-old child, when bored and left on their own, they find something to do. On the particular day mentioned above, their chosen activity was to devour a cardboard box.

Susan K. Stewart didn’t expect to become a “donkey whisper,” as some of her neighbors say. One day God put her in a herd of donkeys, and it was love at first bray. Susan and her husband Bob live in Central Texas with their three dogs, three cats, numerous chickens, and inspiring donkeys. They have three children and six outstanding grandchildren. Susan’s passion is to inspire readers with practical, real-world solutions and a few donkey stories.