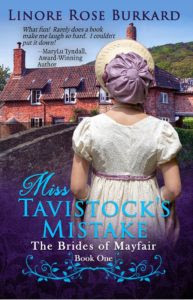 Can Miss Tavistock’s mistake ever be undone?

Young Miss Tavistock is promised in marriage to Captain Rempeare by the wish of her dearly departed papa. But the captain’s been at sea for a decade. When she finally meets him, tempestuous sparks fly, and she impulsively adopts a daring false identity. Going by “Lady X,” she vows never to marry such an infuriating man.

Captain Gabriel Rempeare is prepared to fulfill his duty and marry Miss Tavistock—if only he can clap eyes on her. One circumstance or another keeps them apart, though he cannot seem to avoid the maddeningly lovely Lady X. When fate throws them together in London, Miss Tavistock discovers the real nature of the captain, and regrets her subterfuge. But can such a forgive deceit? Or has her mistake already cost her everything?

Herein lies a regency read that isn't a disappointment or a hard read to digest. With engaging and witty banter, I liked this tale more than some of the famous ones that tend to cause me some modicum of distress when reading them. As life would have it, Margret and Gabriel are intended for each other. Alas, due to life's circumstances, they don't know each other well at all. Such is the risk of many an arranged marriage, but not many young women would dare to risk their futures by assuming a new identity and engaging in subterfuge in order to be assured of the character of their would-be groom. Her guardian is quite kind and reasonably indulgent of her, to the point that she is allowed one season on the 'Ton, to which we are indulged with a great deal of merriment and entertainment as Margret flourishes under the guise of "Lady X".

I greatly enjoyed this romantic, clean read, which so skillfully shows the repercussions of a mistake, if not for the Grace of God. This book is not overtly Christian, it will not "preach" in terms of scriptures, but instead is absolutely perfect for opening a great many conversations about lies and their consequences and is a perfect lead-in for readers new to this genre of books. Miss Tavistock experiences a frightening at the Prince Regent’s palace (Carlton House) toward the end of the book which leads to a romantically pivotal scene. But many readers don’t know happened that day at the palace really happened.
Here’s the scoop:
The fete in June of 1811 was the Prince of Wales’ first real chance to celebrate his becoming Regent in February of that year in the lavish style he loved.
Like Miss Tavistock, many in the haut ton anxiously coveted invitations. At first reserved only for the peerage and their offspring, by the time of the event, more than 2,000 invitations had been issued to all classes. The details in the story regarding the enormous preparations really happened, and much, much, more.
Since our heroine was not able to garnish an invitation to the actual grand banquet, the extraordinary magnificence of the décor, food, and costume of that night had to be excluded from the book. But it was an unprecedented display, and both amazed and perplexed the guests.
The prince was so happy with spectacle that he wished to share it with the public. The unruly crowd described in the book happened on the third day following the banquet. It was reported that more than 30,000 people tried to crowd their way in that day. Men and women lost hats, bonnets, coats, shawls, shoes, and even their under clothing. London papers claimed there were great tubs at Carlton House filled with all the lost items.  Our beleaguered heroine escapes with only her shoes and bonnet missing, but her stockings and gown are torn. Perfect situation to be rescued from!
Contemporaries both praised and harshly criticized the affair. It was described as “an assemblage of beauty, splendor and profuse magnificence,” by admirers, but as  one of the princes’ “greatest follies and extravagances,” by detractors.3
If you’re not previously familiar with the Prince Regent (later George IV), this might give you an idea as to why I sometimes find him too irresistible a figure to leave out of a Regency novel. His extravagance, flamboyance, and tempestuous lifestyle are just too ripe fodder to ignore. Though he doesn’t appear in Miss Tavistock, I have numerous scenes in my first Regency series where he interacts with Phillip Mornay, ‘the Paragon,’ and hero of the books.
NOTE: This post is an abbreviated account of the event, which is included in more detail at the back of the book.
Question: Have you ever been trapped in a crowd? What was it like?

For Him and My Family, September 30

Labor Not in Vain, October 2

Adventures of a Travelers Wife, October 6

Reading Is My SuperPower, October 7

Romances of the Cross, October 8

As He Leads is Joy, October 9

To celebrate her tour, Linore is giving away the grand prize of a $30 Amazon gift card!!

Wonderful review, Carol! Sounds like a must read. Thank you for sharing.

Thank you so much for taking time to bring to our attention another great read.   I appreciate it and thank you also for the giveaway.

Thanks for the great review, Carol! I had such fun writing this book--it gives me great pleasure when I know readers enjoy it.