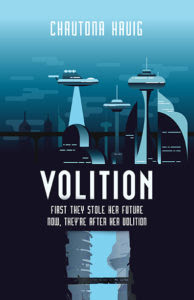 “I should have made that left turn at Tucumcari.”
It’s Doctor Who meets mail-order brides when “rescuers” from the future arrive to save Andi Flanders from a happy life with her loving family and fiancé.
Okay, so they meant to get her suicidal roommate, but hey. Mistakes happen, right?
And as far as Andi’s concerned, they can fix them—by sending her home.
However, when she learns what happens when she disappears from home, Andi has an impossible choice. Stay in the government-controlled futuristic world she despises and never see her family again or return to the twenty-first century and doom an innocent person to death.
Volition— Life and death decisions are so overrated.

Click here to get your copy!
My Review
I LOVE Sci-Fi, so I didn’t want to miss this book because of the author. I wasn’t disappointed. This time-travel love story has plenty of things in it to enjoy. Fun, romance, faith, and happy me, Science fiction. The scary part, this government is all to real. Frighteningly so in its completely possible
portrayal. It’s a strong warning while at the same time enter-wound in the depths of faith in a world of persecution. I love the character growth in this book. I really hope this author blesses us with more books like this one. 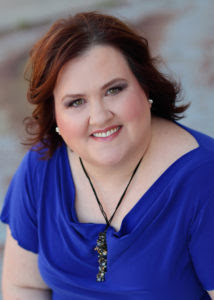 Chautona Havig lives in an oxymoron, escapes into imaginary worlds that look startlingly similar to ours and writes the stories that emerge. An irrepressible optimist, Chautona sees everything through a kaleidoscope of It’s a Wonderful Life sprinkled with fairy tales. Find her at chautona.com and say howdy—if you can remember how to spell her name.

What Happens When You Explore Logical Progressions?

She used chopsticks. Me? I’m a fork kind of gal. But over plates of sesame chicken and fried rice, we hashed out what our NaNoWriMo (National Novel Writing Month) books would be. Every year, I challenged myself.  Once by writing drippy romance (Discovering Hope).  Once by turning a sermon into a story that wasn’t preachy (Argosy Junction). (psst… links are affiliate links—they provide a small commission at no extra expense to you!)
This time, I’d decided the challenge would include writing in the first person.  Anyone who knows me knows how much I don’t like the first-person perspective. As we tried to figure out what our plots would be, my friend added another challenge. “Do science fiction.”
I’ll be honest. I almost laughed her out of the restaurant. But then an idea hit me.  Why shouldn’t I?  I could kill two dislikes in one book.  Bam! Done!

That kicked off a book I probably never would have written otherwise.

I knew doing major techno-science stuff wouldn’t be conducive to trying to write 50,000 words in thirty days, so I immediately chose futuristic over space travel.  The decision to go with a form of time travel was probably inspired by Doctor Who, now that I think of it. I didn’t back then. I just went with what I thought I might be able to make interesting—to write, if not to read.
That kicked off an idea that sent my brain spinning.
What would happen if you got kidnapped and taken to the future, but returning to your former life means someone’s soul will never be redeemed?
Of course, it would take a really strong, amazing character to pull off that kind of thing. Not everyone could do it. But who… who give up her life for someone else?
That’s when I knew. That soul saved would have to belong to someone my character didn’t even like. Gotta raise the stakes, you know?

That’s also when I discovered that I wouldn’t like her—not at first.

Andi Flanders jumped onto the page with hands on hips and eyes flashing. She was lividthat people in the future had interfered with her life. Then she’s broken when she realizes she can’t go back.
Fiercely independent, Andi enters futuristic Rockland with a critical eye and condemning spirit.  Since most sci-fi stuff I’ve seen focuses on sleek, pristine futures full of glass and steel, I wanted to go a different direction.  But how?
That’s when my solution came to me.
I’d take today’s world and push everything to logical exaggerated conclusions.
And then I threw in a character with a love for Jesus and a minor obsession with Ayn Rand’s objectivism.  Yes, I’m aware that those two things can be mutually exclusive. That was the fun of it.
This Rand-spouting, Jesus loving, freckle-faced, fiery redhead had to deal with all if this stuff in a world as opposite from her freedom-loving self as can stand.
Ninety-thousand words later, I was done.  And then I shelved the book.
For ten years.

He’d found a book cover design contest and wondered if he should enter.  And if so, with what book?  We hashed out ideas when I remembered Volition.  It wasn’t edited.  Done, but not edited.  Could I possibly get the whole thing cleaned up before December 31 rolled over into January 1?
I decided to try.
Nolan got to work on a cover while I began editing like nobody’s business.
With the help of my amazing launch team, an incredible editor, and no sleep, the book was live on New Year’s Eve with three hours to spare.
Then my son decided not to worry about entering this year.
He lives. This is a testimony to God’s grace and control over my life.  And my hands.
Or maybe it’s because he lives three hours south of me, and I’ve only seen him once since then. You don’t kill your son at your daughter’s wedding reception. Just sayin’.
But let’s go with the first reason. It makes me sound more spiritual or something. 😉

Through the Fire Blogs, May 12
Wishful Endings, May 12
Lots of Helpers, May 13
Debbie’s Dusty Deliberations, May 14
Pause for Tales, May 14
Emily Yager, May 15
Abba’s Prayer Warrior Princess, May 16
Robin’s Nest, May 16
Texas Book-aholic, May 17
Inklings and notions, May 18
Worthy2Read, May 18
For Him and My Family, May 19
Read Review Rejoice, May 19
deb’s Book Review, May 20
Rebecca Tews, May 20
Book of Ruth Ann, May 21
Little Homeschool on the Prairie, May 22
Truth and Grace Homeschool Academy, May 22
Blogging With Carol, May 23
Quiet Workings, May 24
Better than Rubies, May 24
Artistic Nobody, May 25 (Guest Review from Donna Cline)

To celebrate her tour, Chautona is giving away the grand prize package of a paperback copy and a $25 Amazon gift card!!
Be sure to comment on the blog stops for nine extra entries into the giveaway! Click the link below to enter.
https://promosimple.com/ps/f9f5/volition-celebration-tour-giveaway
Posted by Carol E. Keen at 1:17 AM

Thanks for the review, it sounds like an intriguing book.

Thanks so much for sharing a book description and giveaway also. Sounds great!

Great review, Carol! Volition sounds like a page-turner! Thank you for hosting.