Far Side of the Sea by Kate Breslin 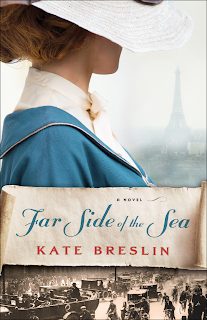 About the Book:
In spring 1918, Lieutenant Colin Mabry, a British soldier working with MI8 after suffering injuries on the front, receives a message by carrier pigeon. It is from Jewel Reyer, the woman he once loved and who saved his life--a woman he believed to be dead. Traveling to France to answer her urgent summons, he desperately hopes this mission will ease his guilt and restore the courage he lost on the battlefield. Colin is stunned, however, to discover the message came from Jewel's half sister, Johanna. Johanna, who works at a dovecote for French Army Intelligence, found Jewel's diary and believes her sister is alive in the custody of a German agent. With spies everywhere, Colin is skeptical of Johanna, but as they travel across France and Spain, a tentative trust begins to grow between them.When their pursuit leads them straight into the midst of a treacherous plot, danger and deception turn their search for answers into a battle for their lives.

My Review:
This is the story of spies and romance, and of carrier pigeons, and wars.  It could have fallen to being too much like many other books in this genre, but it didn't. Instead, it too me on a journey about 100 or so years ago, to a time when faith was clearer and war heroes were born. Collin is endearing and the mystery aspects propelled me through at a much faster rate than I realized. Through France, England, and Spain, this story carried without failing at any point.

5 Stars
My copy came from Bethany House. My review is all mine, left freely.

About the Author:
Former bookseller-turned-author Kate Breslin enjoys life in the Pacific Northwest with her husband and family. A writer of travel articles and award-winning poetry, Kate received Christian Retailing's 2015 Best Award for First Time Author and her first novel, For Such A Time, won American Christian Fiction Writers 2015 Carol Award. Kate's third novel, High As The Heavens, released in June, 2017. When she's not writing inspirational fiction, Kate enjoys reading or taking long walks in Washington's beautiful woodlands. She also likes traveling to new places, both within the U.S. and abroad, having toured Greece, Rome, and much of Western Europe. New destinations make for fresh story ideas.
Please visit her at www.katebreslin.com