I have enjoyed books by this author before. This book, however, is probably now my favorite from Ms. White.  Oh my goodness! This is an amazing read! I was pulled in right from the start with Cyprus being where her father wouldn't have wanted her to be, and her being chased by less than savory males. Her leaps from roof top to roof top had me holding my breath and this was just the very start of the book! This book is multi faceted. It has so much going on from traditional roots of Christmas and St. Nick (Nicholas) to the days when the first Christians were being persecuted for following Christ, to a story of the wonders of lives and God's moving in those lives, this book captivated me. It's an emotional pull in so many different ways as well. I'm so glad I got to read this book, and I highly recommend it as wonderful reading anytime of the year.


A miracle once saved her life ~ will another give her a future?
Cyprus was little more than a child when a fall left her paralyzed…and when the boy known as the wonder-worker healed her. Ever since, she has wondered why the Lord spared her, what he has in store for her. But her pagan father thinks she was spared solely so she could be introduced to the wealthy wonder-worker, Nikolaos.
Nikolaos has never questioned that his call in life is to dedicate himself to the church and to God. Never, that is, until he and his cousin Petros meet the compelling Cyprus Visibullis. For years he struggles with the feelings she inspires…and with the sure knowledge that Petros loves her too.
Petros knows he will never be good enough for Cyprus’s father to consider him as a match for his favorite daughter not as long as Nikolaos is there. But when tragedy strikes the Visibullis family, he will do anything to save his beloved. Unfortunately, his beloved is determined to do anything to save her sisters ~ even at the cost of herself.
As the festival of lights bathes their Greek city in beauty, Cyprus, Petros, and Nikolaos celebrate the miracle of their Savior s birth together one last time. And in remembrance of their Lord’s greatest gift, one of them will make the ultimate sacrifice for the others…and a centuries-long tradition will be born.
About the Author 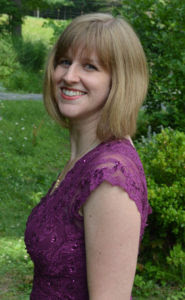 Roseanna M. White pens her novels beneath her Betsy Ross flag, with her Jane Austen action figure watching over her. When not writing fiction, she’s homeschooling her two small children, editing and designing, and pretending her house will clean itself. Roseanna is the author of a slew of historical novels and novellas, ranging from biblical fiction to American-set romances to her new British series. Spies and war and mayhem always seem to make their way into her novels…to offset her real life, which is blessedly boring. You can learn more about her and her stories at www.RoseannaMWhite.com.
Guest Post from Roseanna White
I was fed up with Christmas.
Or, no. I was fed up with the Christmas the world kept shoving at me. The one that was all about presentes. I’d always enjoyed gift giving and receiving, but I began to wonder: What was it I really valued—my Savior . . . or the stuff? We all say the right thing when this question is brought up. But we also all talk about “giving people Christmas” who can’t afford it. About how disappointed our kids might be if they wake to few packages under the tree. And you know, that belies our claims that it’s all about Jesus, doesn’t it?
And of course, when one thinks of gifts at Christmas, a jolly old elf springs to mind. So I started thinking that if I wanted my kids to understand the meaning of Christmas, it might be time to pull the plug on the embodiment of the commercialism: Santa Claus.
But I’m a historical novelist, and I believe in looking at the real history before making decisions. So one morning before our homeschool day began, I sat down and did some online research about Saint Nicholas. About the traditions he began that persist to this day. Who was he, before the Victorians turned him into the figure we know today as Santa?
I read. And I was awed.
Within fifteen minutes, I realized that St. Nick wasn’t the problem with Christmas. This was a man who was committed, above all, to honoring Jesus. Who believed in giving anonymously, so that all the glory went to God. Who performed miracles. Who healed and shepherded a flock under persecution.
St. Nicholas was a man who deserves my honor and respect. Who should be my inspiration for what Christmas is really about, not my scapegoat.
Nicholas gave generously—and in secret. It wasn’t until after his death that the stories started making their rounds about the many times he quietly gave of his wealth. But for centuries afterward, whenever someone wanted to give a gift anonymously, they would sign it from St. Nicholas—it was like saying, “This is because God loves you.”
Why are we giving? Is it to give God glory . . . or to please ourselves and our families? Would you still give if you got no credit for it? If no one even knew it was from you?
That day I read about St. Nicholas, I also decided I’d write a book with him as one of the main characters. A novel that brings one of our traditions—gifts coming down chimneys, stockings stuffed with goodies—to life. And so, we have Giver of Wonders.
Is it a Christmas story? It is. But not like the others out there. Is it about Santa Claus? It is, but not the version you see all over your TV. Is it about giving? It is. But not about presents wrapped and put under the tree. It’s about sacrifice. And it’s about Jesus. And it’s about what He really asks of us, and what He really did for us. And what we’re willing to give for love of Him.
Because that, my friends, is Christmas.

To celebrate her tour, Roseanna is giving away a stocking full of wonder! Click below to enter. Be sure to comment on this blog post to claim nine extra entries in the giveaway!
http://www.rafflecopter.com/rafl/display/e146afbf31/?