I do so enjoy this series, and Death Takes a Ride just makes it more fun!
Dying to Read came first, and Dolled up to Die was next.

Cate is back getting herself innocently involved in major issues, just by being in the right place and the most awkward of times. She is waiting for her PI license to come in, and meanwhile, she keeps trying to remind herself that they don't do murder cases! Keep on thinking that honey, because it isn't working so far! She was just picking up a gal to take her to the Fit and Fabulous meeting, when a murder happened before they could leave! The wounded man is her friend's crush, and it seems like some folks might have had a reason to want him dead.

Mitch is considering relocating, and Cate doesn't want him to, but can't quite mange to say so. Then there is Clancy. He is the wounded man's dog. A large, hairy, skinny tailed, adorable fellow! If I had to guess Clancy's  breed I'd say he is an Irish Wolfhound! However, Cate has Olivia, her cat, and she isn't overly fond of Clancy. Thankfully, for now, Mitch is fond of him. After all, with his owner nearly murdered they had better figure this out or walk away from it, and walking away doesn't seem to work. Besides, what will Shirley do if they can't solve who tried to kill her crush? It will effect her job and a lot more!

I really enjoyed the last two books, this one is even better. I simply love Clancy, and I already liked Olivia.
Cate is still Faith filled and determined, and Mitch might get to be her leading man if he gets himself sorted out!

My copy was provided by Revell in exchange for my honest review, and nothing else.
Thank you Revell! 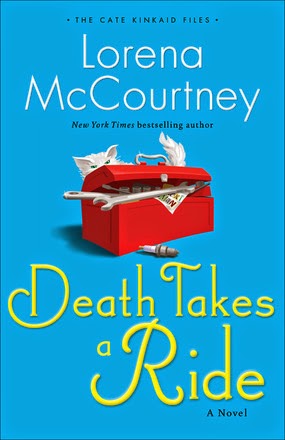 It's official. This case is above her pay grade--and Cate's in over her head.
Cate Kinkaid arrives at H&B Vintage Auto Restorations to give a friend a ride. But, as usual, trouble finds Cate even there--this time in the form of one dead man, one wounded man, and what appears to be a pretty obvious case of self-defense.
Despite having been merely an unfortunate bystander, Cate finds herself sucked into the case. And the deeper she gets, the more she begins to suspect that the shooting in the H&B office may not have been as cut-and-dried as it appeared.
Bestselling and award-winning author Lorena McCourtneytakes you on wild ride in this clever cozy mystery that will keep you guessing.
Praise for the Cate Kinkaid Files
"Quirky, charming, and fun."--Publishers Weekly onDying to Read
"This book has tension that is matched only by humor--you won't find a place to stop and take a breath."--The Suspense Zone on Dolled Up to Die
"An entertaining, quick-paced whodunit that's sure to keep even seasoned mystery lovers guessing."--RT Book Reviews on Dolled Up to Die
Lorena McCourtney is the New York Times bestselling and award-winning author of dozens of novels, includingInvisible (which won a Daphne du Maurier Award from Romance Writers of America), Dying to Read, and Dolled Up to Die. She resides in Oregon. Learn more at www.lorenamccourtney.com.