This is the second book in this fascinating series. Merlin's Blade was the first book, and it was quite strong!
I have to tell you, I have always loved Merlin and King Arthur. From the time I was quite young, I read all sorts of versions of this beloved kingdom, its wizard and it's knights of the round table. I even went so far as to read everything I could about the "lesser knights".

Frankly, I have never gotten "enough". I've read Merlin as a wizard, a druid, and I've read about everything in between. I devoured Stephen Lawhead's The Pendragon Cycle. Sigmund Brouwer has some interesting takes on Merlin as well. With so many to choose from you need to know that with Robert Treskillard's books I have not lost interest at all, and I don't believe that you will either.

You can read my review of the first book by clicking up there where it says Merlin's Blade. I have been glad to have a different slant on Merlin's vision and his love of Jesu. Druid or paganism and Christianity fought a vast, long and bloody war that also encompassed the Knights of the Templar when we read history. Long before that, in this setting, that spiritual battle is being waged.

Merlin can see now, and you have to read how that happened in the first book. Morgan is part of the nemesis that surrounds King Arthur. She's been part demon, part evil fairy, just about everything you can think of, but now... now you will see her as someone a bit different. Someone who has a greater claim to Merlin than just a passing romance told in other tales.

Merlin's little half sister, who he loves, is now tearing at his heart. His allegiance is now to the High King and to Prince Arthur, so he can't stay and care for her and guide her. If that wasn't enough, the family problems just keep growing, and yes, they affect the kingdom and the realm because they don't just stay in the family and it isn't just Merlin having family issues. Merlin is quickly loosing Ganieda to the druids because of her Mother's death and her hatred of Merlin and the Christ he believes in.

One of his family member seeks to use an orb, and a tooth of power, and since the stone from the first book isn't available, he has sworn to destroy Merlin for what he has done. That family member is Merlin's Grandfather, and he is using Ganieda and these dark tools to track, to shadow Merlin. Young Author's life must be protected, even if it requires great costs. Meanwhile the knights are in progress, gathering to form and protect all that is held dear.

My review isn't even doing this book enough justice, but I hope that it will peak your interest and get you reading this well written series. I look forward to the third book in this series! 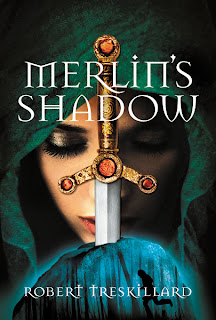 Betrayal.
After destroying the sinister Druid Stone and freeing his people from its dark control, Merlin finds himself to be a royal advisor without a king. Along with his friend Garth and Natalenya, his betrothed, Merlin treks north with the orphaned Arthur in hopes of keeping the young ruler safe from soldiers misled by their turncoat captain. Relentlessly pursued by his nemesis Vortigern, Merlin and his band make for the fortress of Dintaga.
But dangers multiply when Merlin realizes that Vortigern is not his only enemy. Even his own sister appears bent on Merlin's destruction. As the threat on all their lives increases, Merlin discovers their only hope is sailing to the lands of eternal darkness and once again cleansing the world from an ancient and powerful evil.

Robert Treskillard is a Celtic enthusiast who holds a B.A. in Biblical & Theological Studies from Bethel University, Minnesota. He has been crafting stories from his early youth, is a software developer, graphic artist, and sometime bladesmith. He and his wife have three children and are still homeschooling their youngest. They live in the country near St. Louis, Missouri.
It all began when Robert's son wanted to learn blacksmithing and sword-making. The two set out to learn the crafts and in the process were told by a relative that they were descended from a Cornish blacksmith. This lit the fire of Robert's imagination, and so welding his Celtic research to his love of the legends of King Arthur, a series was forged--The Merlin Spiral, now published by BLINK Young Adult Books.
Book 1: Merlin's Blade, released spring 2013
Book 2: Merlin's Shadow, released fall 2013
Book 3: Merlin's Nightmare, released spring 2014

Thanks so much for the review, Carol! And also for being part of the tour. Banding together has really helped promote the CSFF genre.

Thanks so much for your review, Carol! Banding together has really helped promote the CSFF genre.

Interesting to hear the opinion of a fan of the whole Arthurian thing. Because you have greater knowledge and a better judgment on how Merlin's Shadow ranks next to other versions of the story.

Thank you so much for your comment! I love banding together, and I am so glad to get to read your work. These will be staying on my book shelves!
Carol :)

Thank you so much for stopping by, and for your kind comment!