Here is a wonderful treat to read! Merlin's Blade!

Robert Treskillard has done some studying, and done it well. Now he has brought us a book that goes back in depth to an age long gone, and yet, an age that still has bearing on us today. This book opens with events that are a bit confusing, but hang on because it is going to become more clear as you keep reading. We are back in Merlin's childhood, his roots - and in this book they are Christian roots. Jesu's monks are among the small town that Merlin lives in. He is growing up poor, and mostly blind - his face and some of his heart scared from a wolf attack. Lonely son of a blacksmith, Merlin's never considered himself brave or special in anyway. He figures he is blessed to be alive yes, but not much past that. This Merlin believes in honor, and loves his family deeply, and he follows Jesu as best he knows how.

The Druids had been taking a "sabbatical" for a while, less dominate in the area. When they suddenly return, they bring a glowing blue stone with them. They also bring fear, lies and false gods. Merlin's own step-mother had longed to cling to the "old ways" of the Druids. Now it looks like the Druids are going to take Merlin's entire family into their grips using the Stone that people are literally dying to worship.

To top off the issues that just keep popping up, Merlin has been delivered a very flowing, but rather cryptic prophecy and he keeps having visions that he hasn't told anyone about. Merlin happens to see angels as well. And as far as that horrible Stone, a meteor that seems to have magical properties, well Merlin is not harmed by it, nor is he unable to resist the power it wields.

And don't be worried, there are SEVERAL other characters in this book. Merlin's friend who he takes a flogging for to save him from too much punishment in Merlin's eyes, Monks at the tiny Monastery, the girl Merlin likes who's father is abusive and holds a political office - just to name a few. This book has a map for locations, and a very good character index too! Readers will not feel like the history or the story has been "ruined" only deeply enhanced and some Christian perspective added.

THE NEXT book in this series : Merlin's Shadow will be out this Fall! I'm looking forward to that! 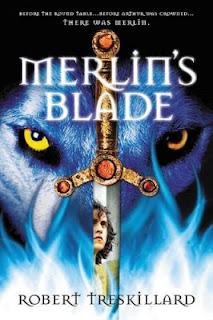 Merlin's Greatest Weakness Could Become His Greatest Strength
When a meteorite crashes near a small village in fifth-century Britain, it brings with it a mysterious black stone that bewitches anyone who comes in contact with its glow---a power the druids hope to use to destroy King Uthur's kingdom, as well as the new Christian faith. The only person who seems immune is a young, shy, half-blind swordsmith's son named Merlin.
As his family, village, and even the young Arthur, are placed in danger, Merlin must face his fears and his blindness to take hold of the role God ordained for him. But when he is surrounded by adversaries, armed only by a sword he helped forge, how will he save the girl he cherishes and rid Britain of this deadly evil ... without losing his life?

Robert Treskillard is a Celtic enthusiast who holds a B.A. in Biblical & Theological Studies from Bethel University, Minnesota. He has been crafting stories from his early youth, is a software developer, graphic artist, and sometime bladesmith. He and his wife have three children and are still homeschooling their youngest. They live in the country near St. Louis, Missouri.

It all began when Robert's son wanted to learn blacksmithing and sword-making. The two set out to learn the crafts and in the process were told by a relative that they were descended from a Cornish blacksmith. This lit the fire of Robert's imagination, and so welding his Celtic research to his love of the legends of King Arthur, a book was forged--Merlin's Blade, book one of The Merlin Spiral, coming April 2013 from Zondervan.

Thanks, Carol, for the great review. I think you will definitely enjoy Merlin's Shadow, which may be my favorite in the series.