The 13th Demon by Bruce Hennigan (The Chronicles of Jonathan Steel)

This book is not for the faint of heart! A rare thing it is for me to pick up a book that I do not put down till it is read from cover to cover, but this is one of them. I read The 13th Demon Alter of the Spiral Eye in three hours. I would have gone to bed, since I started it so late at night, but this book has enough of the Spirit Realm in it that I knew better than to sleep with out having read the ending.

The introduction soon leaves off into the main stories and it just never lets up. The action in the physical and spiritual realms never lets up, nor the plot, nor the draw that is felt to the main characters. I can tell you that Bruce Hennigan has a great grip on demons, and humans. I thought it was very witty to tie the Aztex and Incas into the story, and then how it all ties up in that one artifact that was quite evil. I frankly remember my reaction to such "art" when I studied it in college, along with my being as equally repelled by human sacrifice as were the Christians in this book.

I hope to not offend Mr. Hennigan should he ever read my review, but I found the movie like write up reminiscent of Silent Hill. That is  movie I wound up watching by "accident" and one that has no Christian content other than Hell and being lost eternally in a lot of horrors, but the wild and sometimes unpredictable demonic manifestations are just as dramatic. In that aspect I am sure this would scare the dear "blue haired Grandmothers" of certain denominations to bits! However, for those of us who have seen "too much", we know we fight demons just as livid, just as real as they are in The 13th Demon on a regular basis. Some people just never see them with their physical eyes, and others of us do. 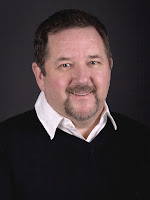 Bruce Hennigan was born and raised in the isolated countryside of Shreveport, La., a place full of possibilities for the active mind of a young boy. The fertile imagination he cultivated while playing deep in the Louisiana woods would lead to a lifelong love of creative writing.

In 2006, Hennigan pursued the Certified Apologetic Instructor Certificate from the North American Mission Board of the Southern Baptist Convention. He has become a frequent speaker at regional and state events on apologetics and his strong point is in making these sometimes hard to understand issues easily approachable for the average Christian. Hennigan’s experience in apologetics inspired him to write his new novel, The 13th Demon: Altar of the Spiral Eye, a supernatural Christian thriller that combines science and faith. Now, combining his love for apologetics and his love for the art of writing, Hennigan is pursuing a career as the “Michael Crichton” of Christian fiction building powerful, fast paced stories around the truths of Christian apologetics.

Hennigan currently resides in Shreveport with his wife and daughter. He continues to write and to practice radiology at the Willis Knighton Health Care System. He has secured Jeff Jernigan of Hidden Value Group (www.hiddenvaluegroup.com) as his literary agent and has signed a five book deal with the Realms imprint of Charisma Media for “The Chronicles of Jonathan Steel”. 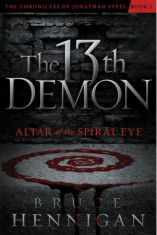 When Jonathan Steel wakes up on a beach in a raging thunderstorm, naked, beaten, and bleeding, he has no idea who he is or how he got there. But just as he starts to make progress in his slow journey to recovery, tragedy strikes again, taking everything in his new life that he has come to love and rely on.

Filled with rage and a thirst for revenge, he searches the countryside for the entity responsible—an entity called only the Thirteenth Demon. His quest brings him to Lakeside, Louisiana, and a small country church where evil is in control and strange writing on the walls, blood-soaked floors, and red-eyed spiders have appeared in the sanctuary.


As he faces the final confrontation with an evil presence that has pursued him all of his life, he must choose between helping the people he loves or destroying the thirteenth demon.

If you would like to read the first chapter of The 13th Demon, go HERE.

Thanks for the great review! Funny you should mention Silent HIll. I took my daughter to see that movie when she was in her late teens and it was one of the creepiest movies I've ever seen. It really, really bothered me. My daughter loved it. And, it was AFTER I wrote "The 13th Demon" so it no influence on my book.
Glad you likes the book. In the coming weeks I'll be posting some videos and additional material on my website about the Aztecs. You might want to check it out.