The Resurrection by Mike Duran

WOW, wait until you read this one!

This book was non-stop motion, very real, and so very true beyond what most people see. The Resurrection shows, in vidid detail, the war we face daily in the spirit realm, but that most people don't understand. I was impressed with so much in this book. I really liked how Mr. Mike Duran had a three fold cord of prayer partners in this tiny church. Their prayers changed things, even when they didn't think it would. It changed things in ways that they didn't expect. It is like my own Pastor preached two weeks ago, the extraordinary happens as we are being obedient in the ordinary. That is what happened to Ruby in this book. The every day ordinary turned into extraordinary and things changed.

I read this whole book in two days. I have to say though, the first night I had lots and lots of dreams having to do with this book, and things that weren't. Reading it alone was enough to shift things in the spirit realm for me. I am one who is not easily effected, it takes something very strong to effect me so much. I want you to know, The Resurrection is that strong!

I have to say I was excited to find a Professor Benjamin Keen. My last name is Keen. I don't see it in a book or anywhere else often. I have a cousin  named Benjamin, and my brother is a Professor. At that point, all the similarities stopped.

I just found out that some are thinking this is a horror story. I don't see that. To my mind horror movies are all blood, guts, killing and hatred, Satan and no God, no redemption. There is plenty of redemption in this book. There is enough forgiveness to cover the worst of sins, but also consequences to those who choose to not follow Christ.

I plan to be back on here to add more to this review. I am not sure how to do it to make it count in the top blog review, but that almost besides the point. This book has a mission, and I am glad that Mike Duran wrote it, and I am glad that a publisher had eyes to see and published it!
--------
Part 2....
There is just so very much to discuss about The Resurrection. I was just thinking about it more today, and I wondered how many Christians have run into occult members. When they did, did they know it, and did they know how to fight in the spirit realm? Like Ruby and her friends, Vinyette, and Marje I have had some experiences with people that lost. I did like Crank though. I believe all God's creatures are His, even if some are not the ones I care for the most.  I had though it would be a much scarier creature than it was, but the food it was eating was a give-a-way.

I also have to tell my readers that this is not the kind of book that you can tell exactly what is going to happen next. I like that a great deal. I have watched countless movies and read many books where I can tell you how it will end, or what the next thing in the plot will be. I appreciate the freshness that Mike Duran wrote with.

Tonight is my third post. Tonight I want to post in this one that I appreciate the character Mr. Cellophane being in this book. Yes, this is a "grey" area that people are scared of. It is an area I can't answer totally, but that I have seen occur. What do you do with a ghost? What is a ghost really? There ARE things that don't respond to being bound, rebuked or exorcized. I do not know why, but I know that it is so. What I really did like is that Mr. Duran did something with this "character" that made sense to me, mostly. This will remain a grey area until we get to Heaven, but I do like how it was used in this book.

The Resurrection is a wake up call, and a wonderful book to read. 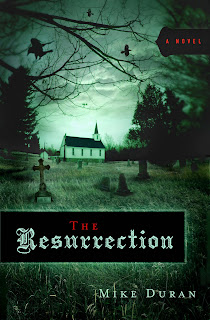 When Ruby Case, an unassuming crippled woman, inexplicably raises a boy from the dead, she creates uproar in the quiet coastal town of Stonetree. Some brand her a witch, others a miracle worker. Yet Reverend Ian Clark could care less. Dogged by demons and immersed in self-pity, Clark is being unwittingly drawn into a secret religious order--one that threatens his very life. But he's about to get a wake-up call.

Together, Ruby and Reverend Clark are thrust into a search for answers... and a collision with unspeakable darkness. For behind the quaint tourist shops and artist colonies lies a history of deceit. And a presence more malignant than anything they can imagine. Yet a battle is brewing, the resurrection is the first volley, and the unlikely duo are the only ones who can save them. But can they overcome their own brokenness in time to stop the evil, or will they be its next victim?
About the Author: 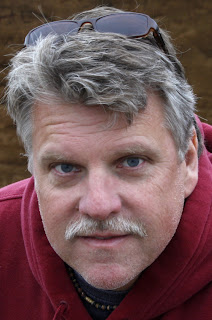 Mike Duran was a finalist in Faith in Fiction's inaugural short story contest and was chosen as one of ten authors to be published in Infuze Magazine’s 2005 print anthology. He is author of the short story “En Route to Inferno,” which appeared in Coach’s Midnight Diner: Back from the Dead edition, and received the Editor’s Choice award for his creative nonfiction essay titled “The Ark,” published in the Summer 2.3 Issue of Relief Journal. In between blogs, he also writes a monthly column for Novel Journey and has served as editor on the Midnight Diner’s editorial team. Duran is an ordained minister and lives with his wife of 29 years and four grown children in Southern California.

In conjunction with the CSFF Blog Tour, I received a free copy of this book from the publisher.
Book link - http://www.amazon.com/exec/obidos/ASIN/161638204X
Author’s web site - http://mikeduran.com/

Nice job, Carol. I can tell this one really resonated with you. Great! I agree--this wasn't horror. Not the slasher kind, but not the psychological kind, either. Someone else referred to it as Gothic, and I think that's closer to it. Sort of a Wuthering Heights feel. Not scary, but somewhat dark. And yes, addressing things that are good to discuss.