Here is a book you will not wish to miss. Starlighter was a wonderful book to read. On a planet that isn't Earth are dragons. These dragons are intelligent, able to speak, and use humans as slaves! On another world a small group of humans are making plans to free those in captivity to the dragons. Thus you enter the world of Jason Masters, and Koren. Koren has a very special gift, and thus she is to guard and bond to an egg that is said will bring about the end of the world as Koren knows it.
Starlighter is good to read, and leaves you happily waiting for the next book in the series. Many aspects of human frailties and strengths were shown where they were easy to understand, and compared nicely to the traits of the dragons.
I look forward to the next book!
Carol :) 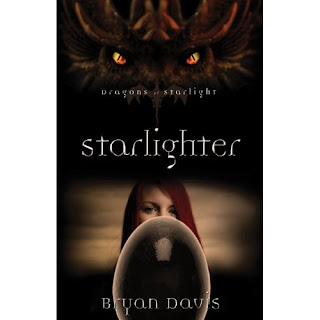 About the Book:
Dragons are enslaving humankind and a black egg signals the end of the world. Jason Masters must journey to another realm and join forces with a slave girl named Koren to rescue the captives and save two worlds from destruction. What if the Legends Are True? Jason Masters doubted the myths: people taken through a portal to another realm and enslaved by dragons. But when his brother is taken, he must uncover the truth and find the portal before it's too late. Once he's through the portal, he meets Koren, a slave in the dragons realm, who struggles to destroy a black egg prophesied to doom all mankind. Jason and Koren must work together to save their two worlds before the dragons learn that their secrets have been discovered. In Starlighter, bestselling author Bryan Davis masterfully weaves fantasy and inspiration into a captivating novel for young adults.

In conjunction with the CSFF Blog Tour, I received a free copy of this book from the publisher. :)

Thank you for participating in this blog tour! I appreciate the support.

Thank you so much for dropping by my blog, and you are most welcome for the support! I truly enjoyed your book, and I look forward to more!