Hello All My Readers!
I did my own review of Saint by Ted Dekker! Yep, I have become a Dekker fan and I can't help myself! My goal is to read all his books as I can, and tell you about them too! ;) Saint is a carefully told tale about a man who thinks he knows who he is, or does he? Trust lines are blurry for all of us, but if you can't remember exactly who you are suppose to be, it gets blurrier yet! Is Carl part of the X group who works secret missions, or is he Saint and the man who goes with that life and identity?
What happens to us when we find out who we really are, and how does it effect those around us? I wonder, often, if that is why people have so many issues with others is because they can't except us for who we are, or what we are called to do! Saint is good enough to give anyone who reads it plenty of action, drama, and deep Spiritual issues that will inspire and cause minds to think long after the last page is read.
Carol :) 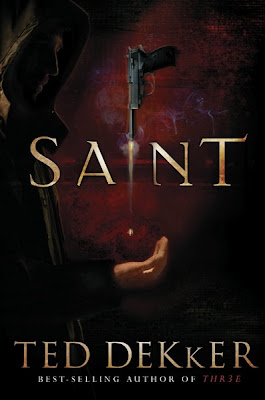 "We call you Saint."

The name ignited a light in Carl's mind. Saint. He'd been covertly recruited for Black Ops and given his life to the most brutal kind of training any man or woman could endure. He was here because he belonged here. To the X Group.

An assasin. The most effective killer in the world. And yet . . . Carl Strople struggles to retain fleeting memories that betray an even more ominous reality. He's been told part of the truth--but what's the rest?

Invasive techniques have stripped him of his identity and made him someone new--for this he is grateful. But there are some things they can't take from him. The love of a woman, unbroken loyalties to his past, the need for survival.

From the deep woods of Hungary to the streets of New York, Saint takes you on a journey of betrayal in a world of government cover-ups, political intrigue, and one man's search for the truth. In the end, that truth will be his undoing.