House Of Wolves by Matt Bronleewe

Me again!
WOW! This book surprised me! A wonderful job by Matt Bronleewe! I am thrilled to see him writing books as well as what we have heard from his music career.  I was interested to find that this was a second book in a series, but it stood alone so well that I didn't know it for a while!
This book is fast paced!  Lots of movement, action, tension and intrigue! This book starts out with a copy of The Gospels of Henry The Lion being given to August and by his Father, under the guise as something that August's son would enjoy. Then all chaos starts to break loose! Secret Organizations and Societies are plotting to rule the world! In the middle of it all is August and one rare book, as the Black Vehm races to find a treasure so rare that Hitler had sought after it.
Read a copy quickly before it winds up on the "big screen" and you find yourself behind!
Carol :)

This week, the
Christian Fiction Blog Alliance
is introducing
House Of Wolves
Thomas Nelson (August 12, 2008)
by
Matt Bronleewe
ABOUT THE AUTHOR:

Matt Bronleewe is a recognized producer, songwriter and author. The former member of the band Jars of Clay, has earned numerous awards producing and co-writing albums that have sold a combined total of over 20 million copies. His songs have recently been recorded by Disney pop sensations Aly & AJ, American Idol finalist Kimberley Locke, and more. Bronleewe has worked with Grammy Award-winning artists such as Michael W. Smith, International pop singer Natalie Imbruglia and Heroes star Hayden Panettiere.

Born in Dallas, Texas, Bronleewe was raised on a farm in Kansas, where he lived until he left for college in 1992. At Greenville College in Illinois, Bronleewe formed the band Jars of Clay with his dorm roommate and two neighbors, and the group soon found success. Though Bronleewe opted to leave Jars of Clay early on to pursue an academic career, he soon found himself in Nashville, co-writing, producing, and playing music professionally.

To add to his list of accomplishments, Bronleewe has expanded his love of story telling beyond music into authorship. He is currently penning a 5 book series for Thomas Nelson Fiction. His first book Illuminated began the adventurous series about rare manuscripts and the mysteries within.

Bronleewe currently resides in Brentwood, Tenn., with his wife and three children. He continues to write and produce music, and he also volunteers through his church to help disadvantaged youth in the community. Bronleewe enjoys reading, taste-testing good food and watching sports, as well as indulging his interests in art, architecture, design and science. 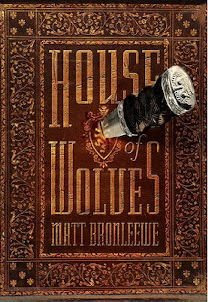 A mysterious book with a dangerous secret.

An evil brotherhood out to conquer the world.

One man stands between them . . . with his family in the balance.

In the twelfth century, Henry the Lion collected the rarest relics in Christendom. And to protect his most precious acquisitions, he encoded the whereabouts in a gorgeous illuminated manuscript called The Gospels of Henry the Lion.

The manuscript has been showing up and disappearing ever since. No one knows where the relic has been hidden . . . or its ultimate power.

Only one man holds the key to the mystery.

He's carrying it in his briefcase at his son's school for show-and-tell, and he thinks it's a fake. But he's about to find out just how real it is.

Because the wolves are rapidly closing in. And if August Adams can't decode the secret in time, the world's balance of power will forever be altered.