Greetings All!
I have been happily lost in a huge oak tree, wherein dwell faeries! Byrony is a young faery who is growing up and learning who she is. As this happens, she changes her name to Knife. Knife loves flying and not be imprisoned in the great Oak where the faeries there have lost almost all of their magic. With the loss of magic the Faery Queen bound almost all the faery folk to The Oak for safety. Knife becomes the Queen's hunter and soon she is enthralled with studying the forbidden world of humans. Before long Knife comes closer to human than ever before, and that is when this story really picks up even more!
(Book Cover) 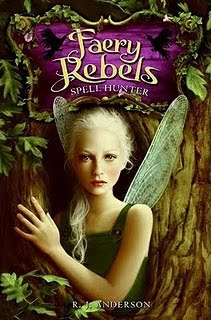 Greetings!
This book has lovely language. I really love it when writers use language that is in keeping with the area or the era. A very well told story, rich with history. The book video is also worth watching if you are interested in this book!
Carol :)

In her best-selling series of Bad Girls of the Bible books, workbooks, and videos, Liz Curtis Higgs breathes new life into ancient tales about the most infamous—and intriguing—women in scriptural history, from Jezebel to Mary Magdalene. Biblically sound and cutting-edge fresh, these popular titles have helped more than one million women around the world experience God's grace anew. Her best-selling historical novels, which transport the stories of Rebecca, Leah, Rachel, and Dinah to eighteenth-century Scotland, have also helped her readers view these familiar characters in a new light. And her nonfiction book, Embrace Grace, winner of a 2007 Retailers Choice Award, presents her message of hope in an engaging and personal way, speaking directly to the hearts of her readers.

A veteran speaker, Liz has presented more than 1,600 encouraging programs for audiences in all 50 states and 10 foreign countries: South Africa, Indonesia, Germany, France, England, Canada, Ecuador, Scotland, Portugal, and New Zealand. In 1995, she received the Council of Peers Award for Excellence from the National Speakers Association, becoming one of only 32 women in the world named to their CPAE-Speaker Hall of Fame.

Feature articles about Liz have appeared in more than 250 major newspapers and magazines across the country, as well as online with Salon.com, Beliefnet.com and Spirituality.com. She has also been interviewed on more than 600 radio and television stations, including guest appearances on PBS, A&E, MSNBC, NPR, TBN with Kirk Cameron, CBC Canada, BBC Radio Scotland, Rhema Broadcasting New Zealand, Radio Pulpit South Africa, LifeToday with James Robison, Focus on the Family, Janet Parshall's America, 100 Huntley Street and Midday Connection.

Liz is the author of twenty-six books, with more than three million copies in print.

Her fiction includes two contemporary novels, one novella, and four historical novels. And she has written five books for young children. 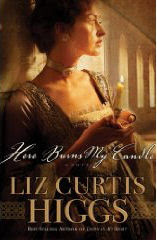 A mother who cannot face her future.

A daughter who cannot escape her past.

Lady Elisabeth Kerr is a keeper of secrets. A Highlander by birth and a Lowlander by marriage, she honors the auld ways, even as doubts and fears stir deep within her.

Her husband, Lord Donald, has secrets of his own, well hidden from the household, yet whispered among the town gossips.

His mother, the dowager Lady Marjory, hides gold beneath her floor and guilt inside her heart. Though her two abiding passions are maintaining her place in society and coddling her grown sons, Marjory’s many regrets, buried in Greyfriars Churchyard, continue to plague her.

One by one the Kerr family secrets begin to surface, even as bonny Prince Charlie and his rebel army ride into Edinburgh in September 1745, intent on capturing the crown.

A timeless story of love and betrayal, loss and redemption, flickering against the vivid backdrop of eighteenth-century Scotland, Here Burns My Candle illumines the dark side of human nature, even as hope, the brightest of tapers, lights the way home.

Hello Readers!
Here is a great book to read! I have been throughly enjoying this one. Shiloh is a wonderful character and the book moves at a wonderful pace! A nuclear meltdown had to be prevented so Shiloh has to work with a man she doesn't know, doesn't trust and isn't sure what to do about. Meanwhile the man who is in love with her is laid out in a hospital! Shiloh has to decide if she is going to let God help her though this really tough time, or if she is going to fail all alone.
Great book!
Carol :)

Ronie has been married since 1990 to a man who can easily be defined in classic terms as a hero. She has four beautiful children. Her eldest daughter is 16 this year, her second daughter will be 13, and her twin boys are 10. After having four children, she finally finished her degree in December 2006. She now has a B.S. in Psychology through Liberty University in Lynchburg, VA. Getting her degree is a huge triumph for both her and her family--they survived!

This degree has also given her a fabulous perspective on her characters
and how to not only make them deeper, stronger, but to make them realistic and know how they'll respond to each situation. Her debut novel, Dead Reckoning released March 2010 from Abingdon Press. And her Discarded Heroes series begins in July from Barbour with the first book entitled Nightshade.

Underwater archeologist Shiloh Blake is consumed with passion for the water and inflamed at the injustices of life. When her first large-scale dig traps her in the middle of an international nuclear arms clash, she flees for her life.

When she spots a man trailing her, the questions are, Who is he? And how is he always one step ahead? Is the man trailing her an enemy or a protector sent by her CIA father?

Reece Jaxon is a former Navy SEAL and now serves his country as a spy. His life is entangled by the beguiling Shiloh Blake as he hunts down the sources to a nuclear dead drop in the Arabian Sea near Mumbai, India. The only way to end this nightmare and prevent a nuclear meltdown is to join forces with Reece. Will Shiloh violate her vow to never become involved in her father's web of intrigue and mystery? Will she reconcile with her past and with him? Will she allow God to help her throught this ordeal of danger, mistrust and uncertainty?

The Lord Is My Shepard by Debbie Viguie

Here is a mystery, and a serial killer book with lots of neat Jewish traditions mixed into it. This is a combination you are not likely to find often! Starting close to Easter the church secretary for the church next to the synagogue finds a dead body in the church, and that is just the start of the wild ride that Cindy finds herself going through.

This book has a dash of romance, but not too deeply. It has plenty of action and lots of theatrical aspects and drama. I enjoyed it.

The Lord Is My Shepherd 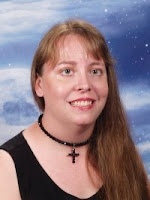 Debbie Viguié has been writing for most of her life. She has experimented with poetry and nonfiction, but her true passion lies in writing novels. She obtained her Bachelor of Arts degree in Creative Writing from UC Davis. While at Davis she met her husband, Scott, at auditions for a play.

Debbie's love for writing brought her from working as a church secretary to a successful career writing supernatural fiction. She is the author of Midnight Pearls, Scarlet Moon, and Charmed: Pied Piper, and the young adult Sweet Seasons series. She also is coauthor of the New York Times bestselling Wicked book series.


Debbie and Scott now live on the island of Kauai, Hawaii. When Debbie is not writing and Scott has time off they love to indulge their passion for theme parks. 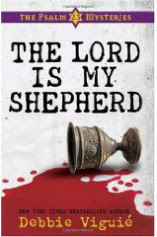 Cindy’s church is getting ready to celebrate Easter, and Jeremiah’s Temple is preparing for Passover when Cindy literally stumbles over the body of an unknown man lying dead in the sanctuary. The church was locked, and a bloody cross necklace on the floor seems to be the only clue. The killer is likely a member of the congregation, but there are hints that similar deaths have happened in the past. Are Cindy and Jeremiah dealing with a serial killer? They have to unravel the clues before Easter Sunday arrives and more people die.

Cindy and Jeremiah come from two different worlds, even though they work right next door to each other. Cindy is a strong Christian who lives a normal but somewhat dull life, working as a church secretary. Jeremiah is a Reformed rabbi with a mysterious past full of danger and excitement. But one eventful Easter/Passover week, the two find themselves working together to solve a murder and stop a serial killer from striking again. Solving the mystery should put an end to their alliance, but the church secretary and the rabbi quickly find themselves enmeshed in another mystery. Soon the two form a friendly alliance and friendship, exploring personal history and faith and growing closer with each passing adventure. Despite their differences Cindy and Jeremiah find a lot of common ground.

If you would like to read the first chapter of The Lord Is My Shepherd, go HERE.